This article is first published in the Front Page Mag, on July 2, 2013 by Raymond Ibrahim 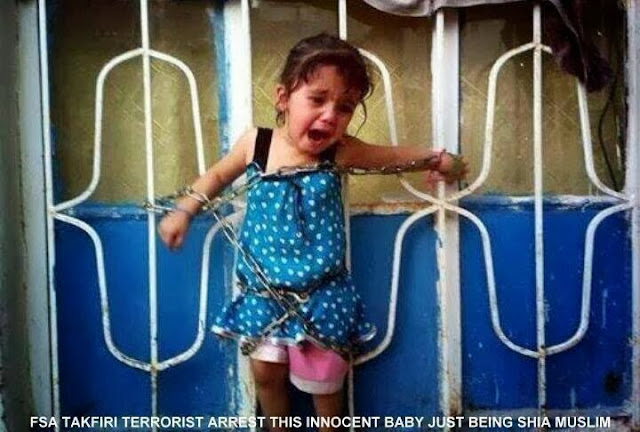 The U.S.-sponsored “Arab Spring” continues to expose itself as a Sunni supremacist takeover. While the indicators are many—from the al-Qaeda Benghazi consulate attack to the ongoing persecution of Christian minorities—attacks on Shia Muslims are also on the rise.

In Syria, where foreign Sunni jihadis, supported and armed by the United States, are attacking all non-Muslims—Christians are prime and obvious targets, and reports of church attacks, abductions of Christians, and their slaughter are many—Shias, who are seen as “false Muslims,” are naturally also under attack. For example, Salafi Sheikh Yasir al-‘Ajlawni recently issued a fatwa saying that those Muslims fighting to topple secular president Bashar Assad and install Sharia law are free to “capture and have sex with” all non-Sunni women, specifically naming President Assad’s sect, the Alawites, as well as the Druze and other Shia branches.

Days ago, popular news outlet, Syrian Truth, posted a photo of a toddler living in the Deir ez-Zor Governorate in eastern Syria, along the Iraq border, who was reportedly tied with chains to a fence from where she witnessed the killing of her Shia mother and father at the hands of the Sunni jihadis making the ranks of the “Free Syrian Army.” Syrian Truth correctly describes them as takfiris, that is, Muslims who, like al-Qaeda, accuse—and slaughter—other Muslims, in this case, Shias, for not being “true” Muslims.

And now in Egypt, where Shias make roughly one percent of the nation, a Sunni mob reportedly numbering in the thousands—also described by Arabic reports as takfiris—attacked the home of the spiritual father of Egypt’s Shia, Sheikh Hassan Shehata, killing him and four of his followers, and wounding dozens of other Shias that had congregated at his home. The mob descended on his residence last Sunday, savagely beating him and his followers with sticks, before setting his house on fire.

Watch the graphic video (also embedded below) as the mob beats the men and drags Shehata’s bloodied body all over the street. According to the general manager of Hawamdia Hospital in Giza, where the Shia leader was taken after his beating, “when Sheikh Hassan Shehata arrived to the hospital, he appeared to be slaughtered from his neck, in addition to several injuries around his body … the rest of the bodies had several injuries as well as skull fractures.” Another report mentions “numerous puncture wounds and severe bruising.”

Eyewitnesses told Ahram newspaper that police stood by and did nothing to stop the attack—just as they invariably do when Egypt’s Christian Copts and their churches are attacked.

Much of these recent attacks on Shias come in response to Salafi clerics—Salafis are ultra “purest” Sunnis—whipping their followers into frenzies against the Shias, especially in the context of the Syrian war. Countless clerics are calling on Sunni Muslims to go to Syria to join the battle against President Assad, not to mention Egypt’s Muslim Brotherhood president himself, Muhammad Morsi, who recently condemned Assad, cutting all ties with Syria.

Thus the “Arab Spring” is proving to be an Islamic takeover by the largest and strongest Islamic faction—Sunni supremacists—who are cleansing the lands of all “non-believers,” from indigenous Christians like Egypt’s Copts to all Shia branches. While apathetic Americans living a world away may think this has little to do with them, it is well to connect the dots and realize that all this is prelude to the resurrection of the caliphate—the chief goal of Sunni Islam, whether for the “moderate” Muslim Brotherhood or al-Qaeda. And the caliphate exists for one ultimate purpose: to expand, until, in the words of Koran 8:39, “all religion is for Allah,” interpreted to mean, until Islamic Sharia law governs the entire world.

Their children now, your children tomorrow. What happened to the small Shia girl in Syria who was tied up to the window grills, forced to watch her parents being brutally murdered, that we reported on a few weeks ago?

The photo is of a toddler who was living in the Deir ez-Zor Governate in eastern Syria, bordering Iraq. She was tied up by members of the U.S.-supported “Free Syrian Army” — which is dominated by foreign Sunni jihadis — and forced to watch as her mother and father were killed for being Shia. Here is how the Obama administration is using your tax dollars on the prompting and insistence of the Saudi’s and Qatari’s — mockingly in the name of “freedom.”

As you can see her heart has been cut out and stuffed with a piece of cloth. No need to speculate what was done to that heart. Notice how this tiny little child has her hands tied behind her back so she cannot resist.

Were her parents some members of a militant group? No, they were just unarmed civilians, taking their children to school, going to work, living their own life until they were slaughtered by Wahhabi Sunni’s right in front of their petrified child. Why? Because they are considered kafirs. Takfiri want to commit genocide of the Shia’s, just as they do with Christians, Jews, Buddhists, Hindus, Atheists, and muslim minority groups like the Alawites, Sufis, etc.

Do you want your tax monies to be supporting Barack Hussein, Francois Hollande and David Cameron’s arming of “rebels”? This is a plot created by the ever terrorist supporting Saudi, Qatari, Jordan, Kuwaiti and Turkey. They have offered to foot the entire bill of a war and attack on President Assad for his “human rights violations”. What are these human rights violations? Defending his country against Sunni uprising which wants to remove the Alawite Assad rule and replace it with Wahhabi Sharia. Because Assad has no friends amongst the Sunni’s, he has tied alliance with Iran. Not wanting a bridge between Iran and the Arab world right next door – and considering Shia muslims to be kafirs, Qatar and Saudi Arabia pretend and fund propaganda that vicious terrorists are ‘rebels’ fighting for democracy.

This conflict is a Sunni/Wahhabi creation under the pretense that al-Qaeda terrorists are ‘persecuted minorities’. Saudi Arabia has released prisoners to fight in Syria. And Qatar has sent thousands of terrorists to the region and fund and help chemical weapons to the terrorists.