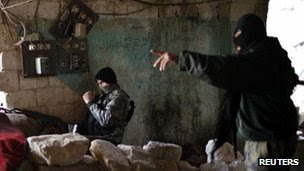 A new report has cast unprecedented light on Jabhat al-Nusra - the shadowy al-Qaeda-linked group in Syria that has become a key player in the conflict.


The document by the UK-based think-tank Quilliam Foundation says the group has developed from al-Qaeda militants in Iraq and now has about 5,000 members.

It says the group - which has claimed deadly attacks against the government - will fight on even if President Bashar al-Assad's regime falls.

But the group lacks popular support.

The 13-page document describes Jabhat al-Nusra (JN) as one of Syria's most effective groups, which aims to establish an Islamist state in the country.

"The short-term strategy of JN is primarily military focused, although preparations are being made for long-term sustainability of the group," it says.

The group, the document says, is now "adapting to the changing conflict, and making preparations for a post-Assad future". This includes "the procurement of heavy weaponry".

The paper also details the group's successful strategy of taking control of the countryside around main cities while simultaneously using secret cells to launch focused and demoralising attacks on urban targets through suicide bombers.

JN has spies in the government, and - unlike the mainstream Free Syrian Army - exerts stern discipline and rigorous selection process.

The rebel group has alarmed Western and Arab governments by its fanaticism and links to al-Qaeda, the BBC's security correspondent Frank Gardner says.

The US has put the group on its list of terrorist organisations.

However, the report questions JN's popular support within Syria and says it is isolated internationally, our correspondent adds.
...