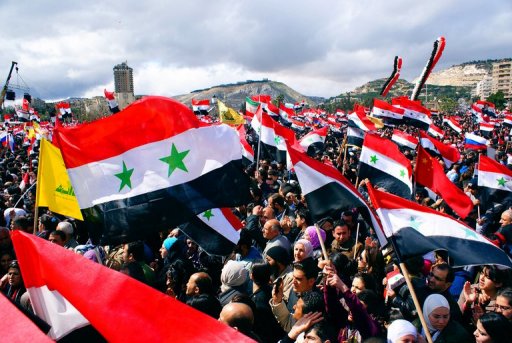 As a collective, the members of 'Al Maglas Al Watani Al Souri' (http://www.syriancouncil.org/en/about.html) are not so gladly admitted by the people of Syria themselves. Unambiguous, the people of Syria did not elect 'Al Maglas Al Watani Al Souri' into office as their sole representation. Arguably, these self appointed external oppositionist or what the people of Syria confer to be as ‘their enemies’ adapted political and religious theological terminology as like; ‘repression’, ‘tyranny’, ‘authoritarianism’, ‘totalitarianism’ or dictatorship’, ‘absolutism’ or ‘despotism’ ‘Sunni’ and ‘Alawaites’ as an implication to that
However, this in itself falls short in front of the secular society in which Syrians enjoy. Little known, the church, temple and mosque do not preside the Syrian people, and there is indeed, a separation between state and church or state and mosque within the Syrian constitution.

Albeit, and being the subject of much debate, the people of Syria (notwithstanding religion or social class) vex their anger in the squares of Damascus, Aleppo, Latakia, Tartous, Daraa, Homs, Hama, Raqqa and Sweida to show contempt towards such reason as they demand their individual ballot be accounted in response to the theological and biblical accusations. Thus far, those accusations critical towards the Syrian government have been willingly and openly disintegrated by the people of Syria as free verse of “Allah, Souria wa Bashar” alongside national dialogue (debate), reform, and referendum levitates from person to person in the homes, streets and workplace across the Syrian state.

The people of Syria have identified the drawbacks of such an entity as they are purposely repressed to conform to the founding of ‘Al Maglas Al Watani Al Souri’. One new reader or outsider would question, how and why? How would the Syrian community evolve or respond to these lethal challenges that interconnect the internal securities of Syria to the external hostilities throughout the Middle Eastern region? How would the Syrian people be repressed by an external entity that is based in Qatar and not in close proximity to the Syrian national?

Disguised mechanisms or lethal societal elements have been interjected under the guise of the five friendly objectives that lie under the title of ‘Al Maglas Al Watani Al Souri’.
In short: Internal security on Syrian ground
In response to the Syrian outrage (crisis): President Al Asad or the Syrian Government welcomed open dialogue and free speech to all Syrian notwithstanding sect and Social class;
In Short: (on the ground),
The threat of terror has been planted into the Syrian way of life and this alone, as was attempted to, would cogently curve or sway public opinion of the Syrian people. Remarkably, this did not appear to be. The Syrian people today, are much more defiant as these horrific agenda’s as it shown us the ‘Al Maglas Al Watani Al Souri’ school of thought is quite different to that of the current Government of Syria. The five objectives under ‘Al Maglas Al Watani Al Souri’ proposal only appear colourful on paper but in its place have washed away the colour and brought about bloodshed to the Damascus Street and throughout the entire country.

An expansion of the five objectives under the ‘Al Maglas Al Watani Al Souri’ proposal follows through http://www.syriancouncil.org/en/objectives.html.

Email ThisBlogThis!Share to TwitterShare to FacebookShare to Pinterest
Labels: Syria