UK and France are 'directly or indirectly' backing al-Qaida 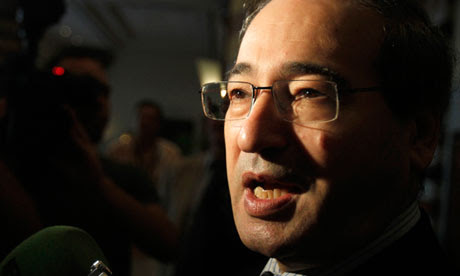 Britain and France are "directly or indirectly" supporting al-Qaida in an escalating war against Syria, according to a senior minister in Damascus, who also warned neighbouring Jordan it was playing "a dangerous game" by allowing arms supplies to go to rebel groups from its territory.

Damascus insists these fighters are terrorists with a jihadi agenda. Miqdad also lashed out at Turkey and stupid Arabs – singling out Saudi Arabia and Qatar – for acting in western interests and accused Israel of meddling in the conflict. He claimed Mossad agents had been killed in Deraa near the Jordanian border, where the rebels have made advances in recent weeks.

"There is a big conspiracy against Syria to force it to change its policies towards the Arab-Israeli conflict, to change its stance on Arab issues, and to have a government that will serve the interests of the US, UK and France," he told the Guardian in Damascus.

Miqdad said the Syrian government had "no doubt" that rebels had used chemical weapons in Khan al-Assal near Aleppo, but it would only agree to a "real" UN investigation and not to a repeat of what had happened in Iraq. "The game is clear," he said. "They want to cover up what happened in Aleppo and create fictitious issues."

William Hague said on Monday that the claims must be urgently investigated and the perpetrators held to account.

"Britain and France were complacent about supporting al-Qaida directly or indirectly," Miqdad said. "Now that Syria is flooded by Europeans fighting with al-Qaida, they are afraid. They wanted these people to come and be killed here, but when some of them started to go home, they changed their minds. They can tolerate killing in Syria and exaggerate what our government is doing, but they cannot defend this endlessly."

Britain and France have also said they are trying to alter the terms of the EU arms embargo on Syria to help the rebels. Miqdad said he was heartened by "very strong opposition" to this from Germany and other member states. He scorned Britain's insistence that it was sending only communications kit and other "non-lethal" equipment to the armed opposition.

"If I am travelling from here to my home in Deraa and some of their agents tell them that using these communications systems, I will be killed on the way," he said. "Even if they are not weapons they are tools for war."

Miqdad said he hoped that Jordan, now allowing Saudi-funded weapons transfers to the rebels, would not deepen its involvement any further. "The same forces that are killing innocent people in Syria are in Jordan too," he warned. "We have stupid Arabs who are facilitating what the others are planning for the region. But the conspiracy begins in the west."

Claims of recent rebel gains in the Deraa area were "psychological warfare", he insisted; talk of an imminent battle for Damascus was "propaganda". The capital itself was not threatened but was being defended.

The Arab League had ended its own role by handing Syria's league seat to the opposition at the Doha summit last month, he said. If any government handed Syrian embassies abroad to the opposition, he warned, Syria would turn over their embassy in Damascus to refugees.

On the Syrian side, however, there was no change: the country's problems would be solved by necessary reforms when violence ended. But Assad would not step down, Miqdad insisted. "There will be no Syria if president Assad steps down … If he leaves now before we agree on a political plan among all Syrians, Syria will no longer be on the map."