NSW Premier, Barry O'Farrell, sent a letter of condolences to the family of Mustapha Al Majzoub who had illegally entered Syria to assist with "humanitarian aid" and was killed.

Here is a screen shot from Majzoub's Facebook page which was constantly being updated with Jihad notes, and details of the so called "humanitarian aid" he was helping the Syrians with. For example, capturing 72 (Jihadis seem to like that number) Alawite supporters, not even soldiers, just supporters, and going ecstatic. His Australian followers also rejoice and anticipate the "slaughter" of the Alawite civilians.

Instead of investigating his family for terrorist connections, as his brother is still fighting in Syria, and his father already had links to Al-Qaeda, and issue a warning to other Australians thinking of Jihad in Syria, our brain-dead premier sends his condolences!

What kind of a joke is this? The Australian government supports terrorism, that is the truth. 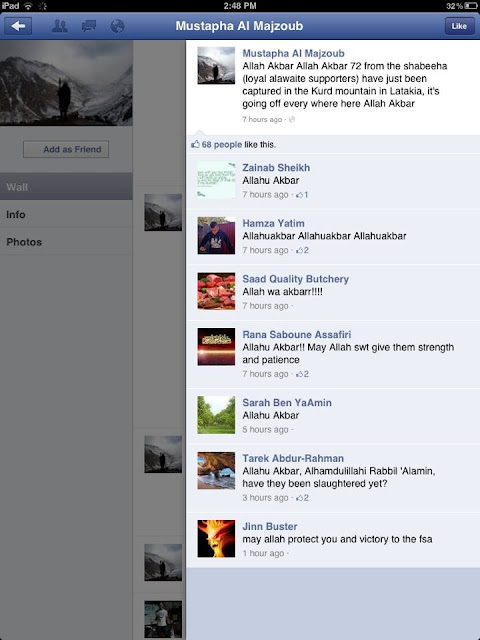