Finian Cunnigham (SCF) , - President Barack Obama addressed the opening of the 68th General Assembly of the United Nations with his usual oratorical formula. Admittedly, the man is a good speaker with flawless technical delivery. But by now this has become a tiresome act of grandiloquence and lofty idealism with no substance. What makes the bottom fall out of the Obama act is the cloying disconnect in his words with harsh reality. It is like listening to a conman whose initially charming words begin to grate on your sense of reason, truth and forbearance as he fumbles in your pockets. 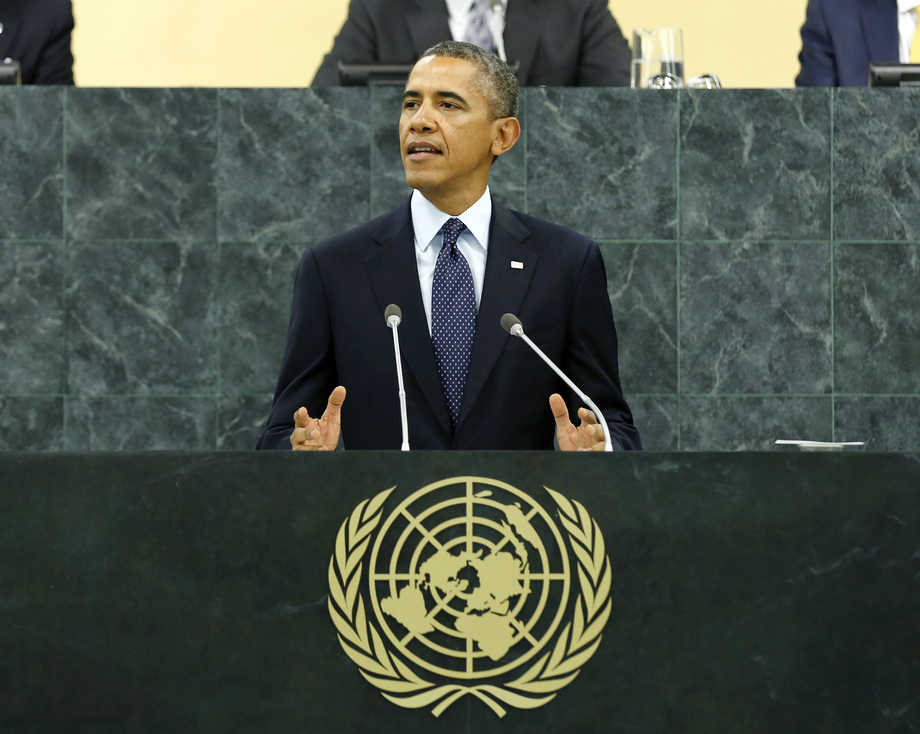 This is the Commander-in-Chief who has vowed to launch unilateral military strikes against Syria without a mandate from the UN Security Council, in contravention of the UN Charter and international law. In other words, he is willing and self-justified to commit the crime of aggression and possibly plunge a volatile region into a conflagration. And yet this reckless politician has the brass neck to stand in front of the world’s nations in New York to lecture on the founding principles of the UN.

Obama made the usual preposterous claims about the beneficence of American leadership in the world, denying that it had any imperialist ambitions. To listen to him, one would think that the US is the world’s largest charitable organization, bringing human rights, democracy and freedom to the oppressed. No wonder Americans can be so confused about the state of the real world when they espouse such arrant nonsense and vain notions of exceptionalism, as Russian President Vladimir Putin discreetly pointed out earlier this month in a column for the New York Times. Unbowed by that reality check, Obama persisted with the conceited American belief in its supposed virtuousexceptionalism as he addressed the UN General Assembly.

What amazes is that his performance received a resounding applause and not one delegate walked out of the assembly. Perhaps this was due to normal human politeness shared by most nations to listen to others even when they don’t agree. American exceptionalism has in the past seen its own delegates storming out of the assembly whenever their ears cannot bear the sound of some other world leader who has a differing, critical point of view.

And there was plenty to find disagreeable about Obama’s speech to the UN this week. With regard to US-led wars in Afghanistan and Iraq, he glibly claimed with a congratulatory tone “those wars are at an end”. It is a deeply troubling measure of arrogance that an American leader can stand in front of the world and talk tritely about wars coming to an end whenever over one million people have been killed in those American aggressions, which were based on flagrant lies and baseless pretexts.

Yet in Obama’s view of the world, we can move swiftly on, and somehow believe that what America is proposing to do in Syria is a completely different prospect, where it has learnt from past mistakes. In Syria, Obama claimed, the US would be using its military might to protect citizens from a tyrant. He denied that US motives were about regime change and vowed that America sought to help the people of Syria choose their own government.

This is what Obama, and American presidents do best, excel in rhetoric over reality. Bereft from his speech was an acknowledgement of the fact that Washington has been harboring plans for regime change in Syria since at least 2001, as disclosed by former US General Wesley Clark. Bereft from Obama’s fine words were details of American weapons and logistics being funneled into Syria for the past two years to drive a campaign of terrorism to destabilize a sovereign government.

Provocatively, the American president reiterated unfounded allegations that the Syrian government of Bashar al-Assad was guilty of massacring its citizens and in particular in the use of chemical weapons on 21 August. Obama mendaciously claimed that the recent UN chemical weapons report, led by AkeSellstrom, proved his allegations. The UN report does nothing of the sort, and a range of evidence elsewhere contends much more convincingly that the perpetrators of the chemical attacks were the Western-backed mercenaries.

Again this attitude of apparent certitude and sanctimony by the US president testifies to the arrogant belief of American exceptionalism. Evidently, American presidents presume to know everything and the rest of the world must accept their viewpoint, even though that viewpoint has on countless occasions been shown to be barefaced deception. Never chastened or shamed, American leaders feel entitled to just keep regurgitating the same self-important rhetoric.

On Iran, Obama, again glibly, acknowledged that the US had engaged in a coup against a democratically elected government (in 1953) and then quickly went on to say that since the founding of the Islamic Republic in 1979 that Iranians have viewed America as an enemy. The rhetorical inference was that Iranians have “an attitude problem” in their view of America, not a humble admission of guilt from criminal interference in the affairs of Iran by the US.

Obama did allude to a possible dialogue to resolve the nuclear issue, especially in the light of Iran’s election of President Hassan Rouhani. But he repeated the tired calumny of the US seeking to prevent Iran developing nuclear weapons, even though all American intelligence agencies have consistently said that Iran does not have or is near obtaining such a weapon, and in spite of the fact that Iranian leaders – most recently Ayatollah Sayyed Ali Khamanei – have decreed such armaments to be immoral and unwanted.

There was not a word or hint from Obama that the decades-old economic sanctions that Washington and its Western allies have imposed on Iran were in any way immoral or illegal and must be rescinded. As usual, Obama assumed that such draconian impediments to a country’s humane development were America’s God-given right to impose. Indeed, as Obama lectured, it was up to Iran to show signs of sincerity and transparency if it wanted avail of a successful dialogue with the US.

On other matters, there was more cant rhetoric about how the US was supporting the creation of “a Palestinian sovereign state” predicated on a “secure Israel”. In other words, as long as the US-backed Israeli regime continues waging war on neighboring states and stealing other people’s land – and thus always feeling insecure as a result of such criminality – then the Palestinians can forget about their rights.

All in all, Obama’s performance at the UN was another triumph of arrogance and delusion in the face of outrageous American lawlessness – a lawlessness that has become chronic and incorrigible, infused with even more exceptionalism. The ultimate exception is that the US leaders obviously view their country as above and beyond the law…

Obama had the cheek to call US predatory relations with other countries as “engagement with the world” and he warned that international relations would deteriorate if the US were to become less engaged.

It may come as something of a shock to such people, but somebody needs to tell Obama and the Washington elite that that is exactly what the world wants and needs for the sake of peace and balanced development – for the US to disengage from imperialist warmongering. And instead to engage much more in its own internal affairs, like rolling back record levels of poverty, unemployment, hunger, homelessness and social decay. Now that would be a welcome American exception.