KILLING SYRIAN CHILDREN WITH ONE HAND, SAVING THEM WITH OTHER 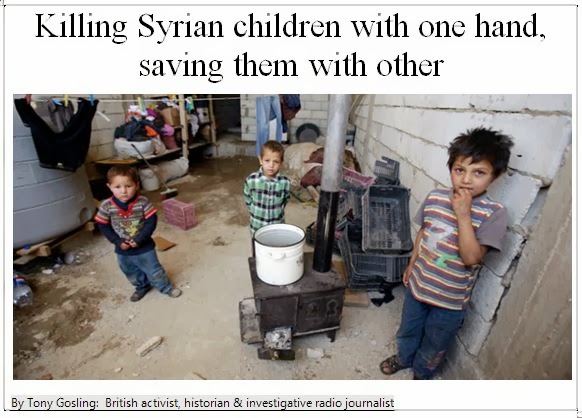 All over British television this week, in ads strategically placed in the middle of news bulletins, the Disasters Emergency Committee fund has been raising money from viewers for Syrian refugees alongside the 'No Child Born To Die' campaign.

The TV ads show pictures of starving and destitute children, dragged over the border from war torn Syria into Jordan and viewers are entreated to help.

The willingness of ordinary members of the public has been outstanding, despite access to the country being difficult for charities the campaign has raised over 20 million pounds (US$32.2 million) for Syrian refugees. Of course they are absolutely right: nobody in their right mind could approve of the slaughter of innocent children but Britain cannot claim to be a 'democracy' until the generosity of the public is matched by leaders entrusted with the purse-strings.

For while the great British public dig deep to help the victims of the Syrian civil war the not-so-great British government have those same children's blood on their hands.

Those desperate TV appeals to help millions of destitute and starving people will only truly help stop the suffering if William Hague, the Cabinet and the Foreign Office stop supporting terrorism. The British government has been backing Syrian rebels just like they did in Libya. Reports suggested that UK has been openly providing targeting intelligence, where and when key government officials can be killed, as well as logistics for NATO's so-called Free Syrian Army (FSA) rebels.

Less openly, UK Special Forces have been training the FSA as well as conducting covert operations within Syria itself. Barely noticed, the recent trial for possession of a firearm and ammunition of former SAS soldier Danny Nightingale confirmed various anonymous reports and listed one of his last postings in Syria.

So if there were anyone left believing that British taxpayers' money has not been instrumental in the deaths of thousands of Syrian children then they should listen to former French President Nicolas Sarkozy's foreign minister, Roland Dumas. In June on French Parliamentary TV network LCP, he explained British officials had approached him long before the Syrian uprising asking for French help to get it started. To quote Dumas:

“I was in England two years before the violence in Syria on other business. I met with top British officials, who confessed to me that they were preparing something in Syria. This was in Britain, not in America. Britain was organizing an invasion of rebels into Syria. They even asked me, although I was no longer minister for foreign affairs, if I would like to participate.”