Knowing the history helps us predict the future, and the events in Syria.. 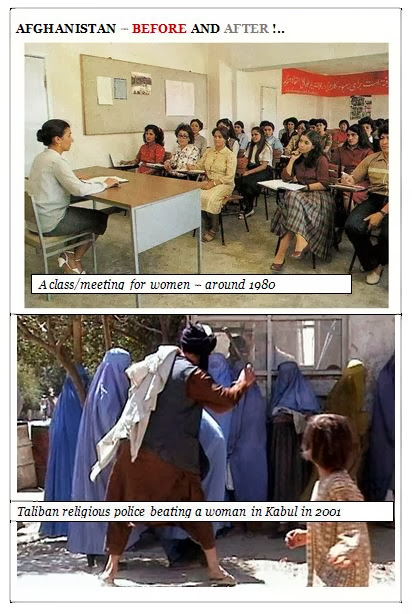 "The Taliban is an Islamic fundamentalist political movement in Afghanistan. It spread from Pakistan into Afghanistan and formed a government, ruling as the Islamic Emirate of Afghanistan from September 1996 until December 2001, with Kandahar as the capital. It gained diplomatic recognition from only three states Pakistan, Saudi Arabia, and the United Arab Emirates (No surprises there!)


While in power, it enforced its strict interpretation of Sharia law, and was condemned internationally for its brutal treatment of women.

From 1995 to 2001, the Pakistani Inter-Services Intelligence and military have provided support to the Taliban. Pakistan has been accused by many international officials of continuing to support the Taliban today.

Al Qaeda also supported the Taliban with regiments of imported fighters from Arab countries and Central Asia. Saudi Arabia provided financial support. The Taliban and their allies committed massacres against Afghan civilians, denied UN food supplies to 160,000 starving civilians and conducted a policy of scorched earth, burning vast areas of fertile land and destroying tens of thousands of homes during their rule from 1996 to 2001. Hundreds of thousands of people were forced to flee to United Front-controlled territory, Pakistan, and Iran.

ORIGINS: The Taliban movement traces its origin to the Pakistani-trained mujahideen in northern Pakistan, during the Soviet war in Afghanistan. When General Zia-ul-Haq became President of Pakistan (seized office in a coup in 1977 and executed the elected Prime Minister Bhutto in 1979) he feared that the Soviets were planning to invade Balochistan in Pakistan so he sent A. Abdur Rahman to SAUDI ARABIA to garner support for the Afghan resistance against Soviet occupation forces. In the meantime, the UNITED STATES AND SAUDI ARABIA joined the struggle against the Soviet Union by providing all the funds to Taliban and al-Qaeda. Zia-ul-Haq has been labelled the "grandfather of global Islamic jihad". About 90,000 Afghans were trained by Pakistan's ISI during the 1980s.

Like Wahhabi and other Deobandis, the Taliban do not consider Shiʻi to be Muslims. The Shia in Afghanistan consist mostly of the Hazara ethnic group which totaled almost 10% of Afghanistan's population. Under the Taliban regime, Sharia law was interpreted to forbid a wide variety of previously lawful activities in Afghanistan. One Taliban list of prohibitions included: anything made from human hair, satellite dishes, cinematography, musical equipment, pool tables, chess, masks, alcohol, tapes, computers, VCRs, television, anything that propagates sex and is full of music, wine, lobster, nail polish, firecrackers, statues, sewing catalogs, pictures, Christmas cards. They also got rid of employment, education, sports for all women, dancing, clapping during sports events, kite flying, and characterizations of living things, including drawings, paintings, photographs, stuffed animals, and dolls. Men had to have a fist size beard at the bottom of their chin. Conversely, they had to wear their head hair short. They had to wear a head covering.

The UNITED STATES SUPPORTED THE TALIBAN through its allies in Pakistan and Saudi Arabia between 1994 and 1996 because Washington viewed the Taliban as anti-Iranian, anti-Shia and pro-Western. Washington furthermore hoped that the Taliban would support development planned by the U.S.-based oil company Unocal. For example, it made no comment when the Taliban captured Herat in 1995, and expelled thousands of girls from schools; the Taliban began killing unarmed civilians, targeting ethnic groups (primarily Hazaras), and restricting the rights of women. In late 1997, American Secretary of State Madeleine Albright began to distance the U.S. from the Taliban...

2) Global Research Article [Hillary Clinton: “We Created Al Qaeda”. The Protagonists of the “Global War on Terrorism” are the Terrorists"] http://www.globalresearch.ca/hillary-clinton-we-created-al-qaeda/5337222