Bombing for Peace in Iraq 3.0


Bombing for Peace in Iraq 3.0 – Repeating the Same Actions Over and Over Expecting Different Results

Once again the United States war machine is hard at work, conditioning the American public to accept another war. This time it appears Iraq has been selected to receive a fresh round of bombings for peace. Third time’s a charm?

Somehow I don’t believe peace will be magically appearing out of the rubble the U.S. would be leaving behind. Never has, never will.

The landscape has drastically changed from what it was last year when thousands of ‘No War With Syria’ rallies were successfully organized by Americans across the country, just days before the New York Times featured an op-ed on Syria by Putin on September 11th.

We're about to find out why the U.S. government and mainstream media has been waging a war on RT’s legitimacy since the Winter Olympics in Sochi.

Those of us who have followed the Syrian crisis from the beginning knew the U.S. was never going to just ‘walk away’ from their war plan after they reluctantly accepted  Putin’s ‘get out of jail free card’, agreeing to not bomb Syria if al-Assad’s regime destroyed their chemical weapons.

Trust me, no one in the U.S. government was celebrating this public relations disaster. Approval ratings plummeted across the board and President Obama was mocked by his critics. They lost control of the Syrian plot and before they knew what hit them, the American people were too informed to continue being so misled.

The people didn’t want to start another war. We didn’t think it was a good idea to arm Islamic jihadists with weapons. Why would we? An bombing campaign would have meant the U.S. was essentially acting as the jihadists air force. We were right to oppose military strikes on Syria. We were right for questioning where the lethal and non-lethal aid was going.

RT, along with dozens of other alternative media sources, played a vital role in exposing who the U.S. was actually funding and arming in Syria with weapons, along with Saudi Arabia and Qatar.

Almost exactly one year ago, Putin made headlines around the world when he warned the U.S. against arming Syrian rebels “who kill their enemies and eat their organs”.

Putin was right. This would also explain why Iraqi Prime Minister Nuri al-Maliki and his government accused Saudi Arabia of backing the ISIS “genocide” in his country.

“We hold them responsible for supporting these groups financially and morally and for its outcome – which includes crimes that may qualify as genocide: the spilling of Iraqi blood, the destruction of Iraqi state institutions and historic and religious sites,” a government statement said.

Even the U.S. admitted that back in 2012 most of the weapons Saudi Arabia was supplying to the Syrian rebels had fallen into the hands of Islamic jihadists. That would be the same group which has evolved into ISIS.

“The opposition groups that are receiving the most of the lethal aid are exactly the ones we don’t want to have it,” said one anonymous American official to the New York Times. 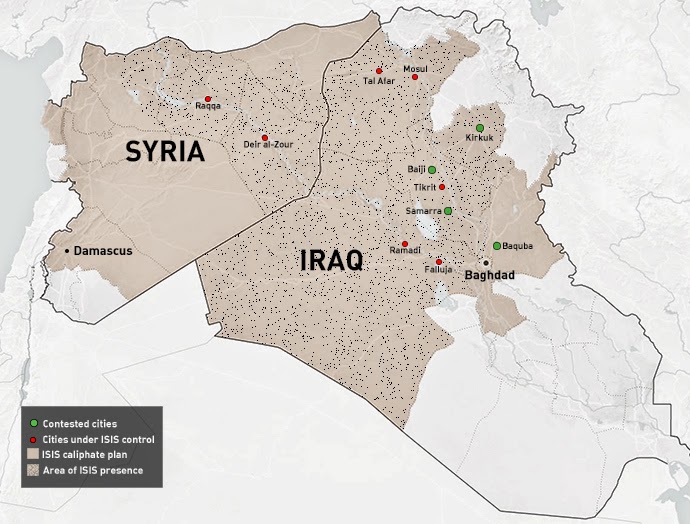 Did you notice the U.S. now wants al-Maliki to resign to make way for a new Iraqi government? Apparently we’ve already come a long way from where we were just last week, when al-Maliki was requesting U.S. air support in his fight against ISIS. Do you think he ever suspected Obama would turn around and demand his resignation?

This is exactly what Saudi Arabia wants to see unfold next. Al-Maliki should have known better than to request American support in Iraq. It wasn’t an accident that Obama agreed to a $60 billion arms deal with Saudi Arabia a year before the crisis in Syria broke out. The Saudis are the U.S. government’s strongest ally in the region, yet they’re consistently the world’s leading exporter of militant terrorists year after year.

Think of it this way… Today we have al-Assad’s military battling ISIS in Syria while al-Maliki’s military is battling the same group in Iraq.

The U.S. has stated it wants to see regime change established in both countries. Isn’t regime change something ISIS would want in Syria and Iraq? Something smells like fish.

I don’t know if ISIS is planning a 9/11-style attack, Lindsey Graham, but will you please explain to me why the U.S. didn’t think of this before arming these terrorists with weapons in Syria?

If the U.S. really wants to stop the spread of Islamic terrorism in the region, shouldn’t they stop funding and arming jihadists in Syria? Even U.N. Secretary-General Ban Ki-moon urged the Security Countil earlier today to impose an arms embargo on Syria.

Now would be better than never!

The U.S. wants to see administrations in place that are friendly to Saudi Arabia, not Iran. Earlier today we heard Saudi Foreign Minister Prince Saud al-Faisal warn Iran to not intervene in Iraq to defend their neighbors from ISIS. Meanwhile, Israel warned the U.S. against cooperating with Iran on Iraq. Did they really think Iran would want to cooperate with the U.S. military?

Hassan Firouzabadi, the chief of the general staff of Iran’s armed forces, stated Iran would never cooperate with the U.S. in a war on ISIS. Firouzabadi claims ISIS is a military reaction to the victory of al-Assad in the Syrian presidential election. He thinks they are under the influence of the United States.

As if all of this was not enough to make your head explode, ISIS seized Saddam’s chemical weapons stockpile yesterday. The world of public opinion has had a wide range of reactions to this development. I’ve noticed a couple of common questions that keep popping up:

“Wait, I thought we failed to find any WMD’s in Iraq…”

That is certainly what most of the world believes!

2004: Closing an investigation into Saddam Hussein’s chemical weapons, the CIA’s top weapons inspector in Iraq has declared the hunt for WMD’s has “gone as far as feasible” and found nothing resembling the purported programs the U.S. government claimed existed, which were used to justify the invasion in 2003.

2014: ISIS has seized Saddam Hussein’s premiere chemical weapons production facility. The U.S. is reporting the facility still contains a stockpile of old weapons, but claims they are ‘probably useless’ because they are ‘too large’ and cannot be transported.

“Okay, so why didn’t the U.S. military destroy all of Saddam’s chemical weapons?”

Good question. The United States was ready to bomb Syria last September unless al-Assad agreed to destroy all of Syria’s chemical weapons. Why didn’t the U.S. destroy all of Saddam’s weapons while we occupied Iraq for 8 years?


Last year the U.S. casually ignored the U.N. inspector who concluded the first chemical attack was carried out by Syrian rebels and not the Syrian government. We knew in 2012 that most of the weapons sent to the rebels ended up in the hands of the worst Islamic jihadists, and we knew in May 2013 that the Syrian rebels used chemical weapons.

Did the Obama administration really think we wouldn’t notice this response when questioned on whether the military campaign in Iraq would be extended into Syria?

Why isn’t anyone talking about how the Syrian government is going to react to this? What about Iran? Russia?

On Wednesday, members of the Independent US Observer Mission who monitored the Syrian election declared President Bashar al-Assad’s victory as legitimate during a press conference at the United Nations in New York. Does this put things in perspective?

If the U.S. expands airstrikes against ISIS into Syria, why wouldn’t they include Syrian military targets? Just last year ISIS was receiving lethal and non-lethal aid from us, leading the Syrian rebels against al-Assad’s regime. Would the mainstream American public even notice the difference between the two targets? Would they even care? Doubtful. 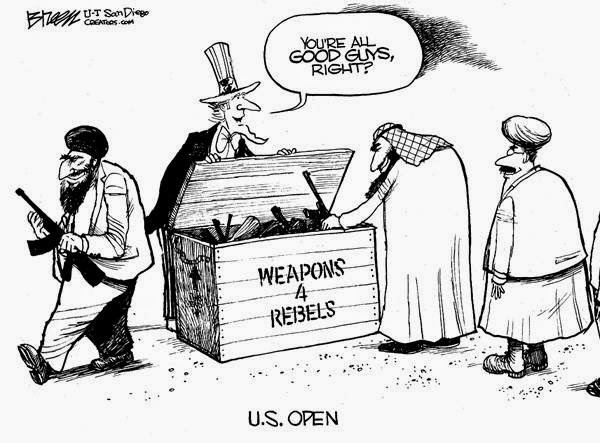 If alternative media outlets such as RT continue to be ignored and/or demonized by the U.S. government and mainstream media during this round of the crisis, it’s doubtful Russia will be in a position to take an active role in the debate over Iraq. Considering everything they’ve got on the table involving Ukraine, who can blame them?

Last year, Russia and China warned the U.S. against military intervention in Syria. Russia even threatened that it could lead to a nuclear conflict. I don’t think anyone can predict what type of reactions to expect during round two.

Of course, President Obama has already declared he does not need approval from Congress to strike Iraq, yet in the same speech he said he’ll consult with Congress on Iraq. Over the last 6 years we’ve come to expect this type of doublespeak with Obama. It’s pretty terrifying to witness.

Any chance Putin had to influence the outcome diplomatically has already likely been nullified. It’s up to us now…

If you’d like to hear what you’re not being told about the Fall of Iraq, I highly recommend you watch the mini documentary below:
.