"My position on Iraq" by Sukant Chandan 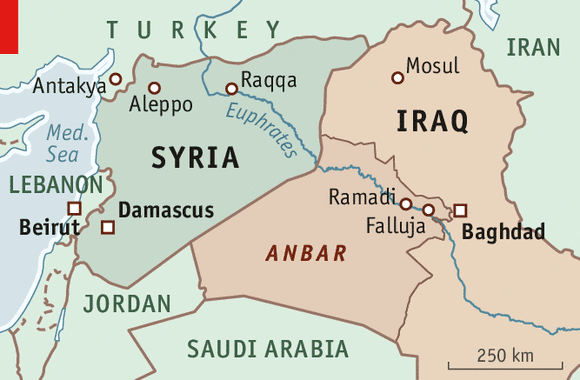 ISIS are a death squad infiltrated and covertly germinated by western covert forces, and ISIS' actions directly serve western strategic interests which are basically to violently divide communities and countries. ISIS has been pushed from Syria due to the Syrian government led Resistance there. Hence ISIS have done this big push in Iraq, which will in turn help (through looting, new weapons captured) their dirty work in Syria. IN THIS DYNAMIC I am in support of all forces in Iraq to defeat them. At the same time, we have a total sectarian mess in Iraq which is QUALITATIVELY different to Syria:

In Syria there is a socialist and independent country to defend, which pre 2011 with all its problems is an inspiring model that motivates our masses there to defend it. In Iraq, we dont have that. We have a tragically traumatised country for at least 25 years if not longer.

Unlike Iraq, in Syria we have an anti-imperialist Resistance which is, despite all the lies and nonsense out of the western mainstream and their non-white hangers on, we have a cross sectional unity in struggle against the nato/GCC death squads, we have a Syrian Arab Army of majority Sunnis, and we have lots of Shia, Sunni, Christian, Socialist, Armenian, Kurdish and many other formations UNITED in life or death struggle against a common enemy. We have nothing of the sort in Iraq.

Unlike the contending forces in the Syrian war, in Iraq we have contending forces (aside from ISIS for a second) the former Iraqi Baathist forces, and then Tehran-aligned forces. BOTH these forces built/have built functional models of society for their peoples, BOTH are anti-imperialist and fought the usa and uk occupation of Iraq, BOTH were/are under direct attack from imperialism. However, the historical Iraqi-Baath and Islamic Republic of Iran schism is still playing itself out and its results are that sectarian division and violence which ONLY benefits the west and its Guif allies are winning.

THIS is the strategic and concrete basis for unity in Iraq. We do NOT have that with the forces of the death squads (loosely called 'AlQaeda'), nor the Muslim Brotherhood wo have generally always been and remain hugging nato directly or indirectly with great intimacy as a means by which they seek power for themselves. Hence there is NO concrete basis between anti-imperialist forces and forces which have shown nothing but collaboration for generations with the common enemy (the west and the zionist state).

We can see amongst anti-imperialists that they are split on the question of Iraq now. Many anti-imperialists respect one of the sections of the Resistance against the occupation in Iraq which is led by the Iraqi Baath in the form of the JRTN (read more about them here: http://tinyurl.com/mxa8jz5 ).


However, despite their heroism against the occupation, as long as they term Iran as the 'Safavid Persian empire', there will be no progress out of the empire-interested schism on that front. Also, we have Iraqi PM Maliki, who is close to Iran AND also the Syrian government and Lebanese Hizbullah. However, similarly to JRTN etc, there will be no real move forward out of this awful mess until Iran allows or/and facilitates a historical and strategic rapprochement between the Baathist and Shia or pro-Iranian forces in Iraq. Is there any chance for such? Actually, many of the Iraqi Baathists are in support f the Syrian government against the nato covert operation there, and this is very much an opening that can be worked on, but all parties must develop mutual confidence building measures rather than the zero sum total games they are playing out currently.

The sieges of Fallujah by the yankee occupation was a chance for this Sunni-Shia unity to take place. It did not. The siege of Najaf by the yankee forces could have seen such a unity develop. It did not. Going further back, after Iraq was laid to a terrible siege of war by imperialism post 1990 there could have been a thaw in Iran-Iraq relations that could have trumped the sectarian-promoting agenda of the 'west'. That thaw never took place, although there WAS a thaw between the Syrian Baath and Iraqi Baath governments in the lead up to 2003. Interestingly, in the split of the Iraqi Baath after the demise of Saddam Hussein, one faction was said to be very close to the Syrian government intelligence services. Unlike the death squads of nato and the pro-nato Muslim Brotherhood, these forces in Iraq have a basis for unity, for the sake of God they were all shooting in all the same direction against the occupation forces for many years, and have good experience in socialist, anti-imperialist and anti-zionist state building!

Here we can see one of these Baathist armed leaders saying that they are stronger than ISIS and consider them "barbarians" (http://preview.tinyurl.com/mtdmple ). OK, so perhaps these people should consider opening up a strategic unity program with Iran and some of the Shia forces in Iraq to defeat the death squads, protect ALL Iraqis from them and imperialism and also defend the Syrian government? Might be far fetched, but this to my mind is the only realistic course of action before we fall of the massive cliff edge falling into the yankee canyon to our collective deaths which is at the same time is giving oxygen to the empire.

It's a small consolation that I am not the only one who is asking for this. Many anti-imperialists across the world who have supported the Iranian, Syrian, Libyan, Iraqi and ALL of our peoples in the region struggle against imperialism and zionism and who are not bias and partial to any section of our people are also in agreement that this must be the only course that we can pursue to thwart the enemy's plan. In this regard, I am in total agreement with the wise strategic analysis and suggestions of sister Amal Saad Ghorayeb, who calls for a new pro-Resistance contract:
"... Just as Maliki squandered away Sunni tribal [Sahwa] support with his sectarian discourse and negligence, he has succeeded in alienating Sunni officers in the US-funded and trained army, and antagonized mainstream Sunnis with his oppressive rule and aggrandizement of power.

"At the end of the day, we in the Resistance Axis are strategically aligned with a regime born of the very same invasion and occupation we are attempting to thwart in Syria. While we can rationalize this alliance on strategic and pragmatic grounds, we need to call for its drastic reform, beginning with a new social contract between Sunnis and Shia, as Nasrallah proposed in the midst of the US invasion of Iraq. In the absence of such a contract, any military offensive risks degenerating into a full-scale civil war which will drag our region even further into the sectarian morass so desired by the US-Israel-Arab Gulf." (source: http://tinyurl.com/ouhht3q )

Yes, I positively see the priority of defeating ISIS forces which only exist to soften up our lands for the benefit of nato, and hence the primary contradiction to focus on and make our political position clear is in relation to the Syrian arena. However, there are intense and violent contradictions at play here engineered by the west and internalised to some extent in Iraq. Is another better 'Muslim world' possible than the mess we have? Of course it is. But that requires us to step back, not to step back from militant anti-imperialism, but to really work out if we are interested more in the common liberation of ALL our peoples in the region, or are we going to remain loyal to one section at the expense of another all of which will only benefit our common enemy."