The genius of Israeli evil

Otherwise Occupied / The genius of Israeli evil: It poses as concern

How to murder human beings without using an explosive or a knife, how to empty them from within, how to steal from workers of the land the thing they hold most dear. 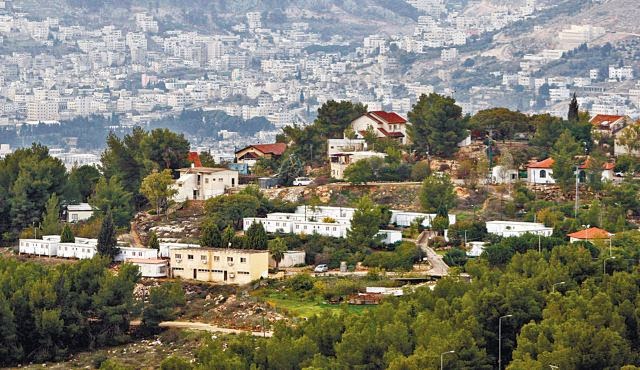 The settlement of Elon Moreh, with the city of Nablus in the background.

Israeli evil is not at all banal. Abundant in inventions and innovations as well as in age-old techniques, it trickles like water and bursts out from hidden places. But unlike floods, it does not reach an end, and it affects some while being invisible, undetectable and non-existent for others. The genius of Israeli evil is in its ability to disguise itself as compassion and concern (thus providing Bernard-Henri Lévy and Elie Wiesel with yet another opportunity to praise the Jewish state in widely-read essays).


Take, for example, the inventive technique of Israeli agriculture: two to five days per year of cultivating the land. A shmita (sabbatical) for land every year, instead of remaining idle every seven years. It does so 360 days each year. Our compassionate and generous army allows tens of thousands of Palestinians living in the West Bank to work their land for only three or four or five days per year in order to protect them from attacks by Israelis, colonizers, settlers – in short, Jews. For the rest of the year, the land is a mirage.


Take, for instance, the village of Deir el-Hatab. The settlement of Elon Moreh and its outposts dominate about half of its 12,000 dunams (some 3,000 acres). Because of the proximity to the settlement, the village’s farmers are not permitted to cultivate about 6,000 dunams of their land, nor are they permitted to walk there, graze flocks, rotate crops, plow, weed, watch birds or transmit their family’s accumulated knowledge to the young generation. They may go there only two or three days a year to pick the olives that Allah made to sprout with his rain and that unknown Israelis did not manage to steal.

Evil also excels at being patient. It knows that land whose owners do not access it for 360 days a year does not disappear. It becomes, de facto, land belonging to the master who loves nature and hikes and grazing flocks, just as our ancestors did.

As is written on the sign beside the road leading out of Elon Moreh: “May it be Your will, our God and God of our ancestors, that you lead us in peace and guide our footsteps in peace ... and rescue us from the hand of every foe, ambush and highwaymen and all manner of calamity along the way,” (an excerpt from the Jewish travelers’ prayer.)


Take Deir el-Hatab and multiply it by ... how many? Seven villages? A hundred? Add in the spring of Deir el-Hatab, the water source that the grandmothers of the village’s grandmothers enjoyed and used. It has now become a pool for ritual immersion and a place to relax for Jews only, by the side of the Palestinian-free road leading to Elon Moreh. Multiply it by dozens more springs that have suffered a similar fate.


Put everything together and you get another innovative technique from the producers of Israeli evil: How to murder human beings without using an explosive or a knife, how to empty them from within, how to steal from workers of the land the thing they hold most dear – not only their livelihood and their children’s future, but also the deeply-rooted relationship of love they have with their homeland, which exists without satanic verses or eye-rolling or generous subsidies from the World Zionist Organization’s Settlement Department.


The genius of Israeli evil is that it is broken down into an infinite number of atoms, individual cases that the human brain – and even more so a newspaper column – cannot contain in their entirety, and a single definition cannot conceptualize them. We will write about stolen land, and leave out the demolished home. We will leave out both in favor of writing about the prohibition on family visits in prison, but there will not be enough time to write about the military raids and the invasion of a home with frightened children inside, and the atmosphere of “action” in the army unit.

We will waste days searching for the soldier who aimed a rifle at the expense of the days required to describe the branching out of the siege of Gaza under the shadow of promises of relief measures. We will write about the relief measures, and it will be forgotten that the Gaza Strip continues to function like a detention facility for 1.8 million people. We will write about a detention camp, and people will tell us that we are repeating ourselves. We will write about a 40-percent unemployment rate in Gaza and about how only seven of 40 graduates in nursing from Al-Quds University found work, and people will say: “But what does that have to do with us?”


Evil is very good at recruiting linguistic accomplices. “An intifada is running wild in Jerusalem,” read one headline. When will we write in a Hebrew headline that the built-in, well-thought-out and deliberate discrimination against Palestinians committed by the Interior Ministry, the Jerusalem municipality and the National Insurance Institute for decades continues to run wild and inflict disasters in the city? It is impossible. It’s too long for one headline.


Or a “human-rights violation” – a definition by which this writer also transgresses, a definition that is dragged into dealing with those who have been harmed (“victim,” another despicable collaborating word) instead of those who are doing harm.


To keep our blood pressure down, we have not touched on the evil embodied in the killing of children by Israeli troops, the evil of Israel’s collective disregard of the inevitable wrath that builds up with the burial of each bullet-riddled child, the evil that exists in the evasive wording imposed by so-called objective traditions of news reporting. Killing? Israeli soldiers shoot at Palestinian children because that is the job of soldiers who are sent to protect, with self-sacrifice, the colonialist enterprise and the benefits that it provides to the master nation. Is it any wonder that so few Israelis are emigrating abroad?