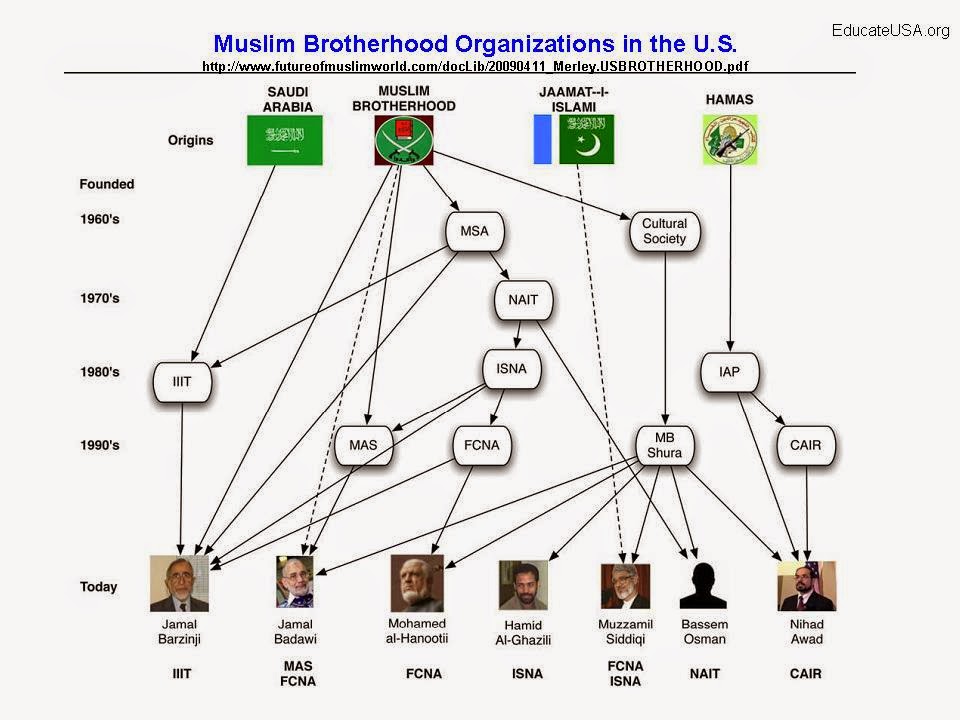 One might be led to think that if international law enforcement authorities and Western intelligence agencies had discovered a twenty-year old document revealing a top-secret plan developed by the oldest Islamist organization with one of the most extensive terror networks in the world to launch a program of “cultural invasion” and eventual conquest of the West that virtually mirrors the tactics used by Islamists for more than two decades, that such news would scream from headlines published on the front pages and above the fold of the New York Times, Washington Post, London Times, Le Monde, Bild, and La Repubblica.

If that’s what you might think, you would be wrong.

In fact, such a document was recovered in a raid by Swiss authorities in November 2001, two months after the horror of 9/11. Since that time information about this document, known in counterterrorism circles as“The Project”, and discussion regarding its content has been limited to the top-secret world of Western intelligence communities. Only through the work of an intrepid Swiss journalist, Sylvain Besson of Le Temps, and his book published in October 2005 in France, La conquête de l'Occident: Le projet secret des Islamistes (The Conquest of the West: The Islamists' Secret Project), has information regarding The Projectfinally been made public. One Western official cited by Besson has described The Project as “a totalitarian ideology of infiltration which represents, in the end, the greatest danger for European societies.”

Now FrontPage readers will be the first to be able to read the complete English translation of The Project.

What Western intelligence authorities know about The Project begins with the raid of a luxurious villa in on . The target of the raid was Youssef Nada, director of the Al-Taqwa Bank of Lugano, who has had active association with the Muslim Brotherhood for more than 50 years and who admitted to being one of the organization’s international leaders. The Muslim Brotherhood, regarded as the oldest and one of the most important Islamist movements in the world, was founded by Hasan al-Banna in 1928 and dedicated to the credo, “Allah is our objective. The Prophet is our leader. Qur’an is our law. Jihad is our way. Dying in the way of Allah is our highest hope.”

The raid was conducted by Swiss law enforcement at the request of the White House in the initial crackdown on terrorist finances in the immediate aftermath of 9/11. US and Swiss investigators had been looking at Al-Taqwa’s involvement in money laundering and funding a wide range of Islamic terrorist groups, including Al-Qaeda, HAMAS (the Palestinian affiliate of the Muslim Brotherhood), the Algerian GIA, and the Tunisian Ennahdah.

Included in the documents seized during the raid of Nada’s Swiss villa was a 14-page plan written in Arabic and dated December 1, 1982, which outlines a 12-point strategy to “establish an Islamic government on earth” – identified as The Project. According to testimony given to Swiss authorities by Nada, the unsigned document was prepared by “Islamic researchers” associated with the Muslim Brotherhood.

What makes The Project so different from the standard “Death of America! Death to !” and “Establish the global caliphate!” Islamist rhetoric is that it represents a flexible, multi-phased, long-term approach to the “cultural invasion” of the West. Calling for the utilization of various tactics, ranging from immigration, infiltration, surveillance, propaganda, protest, deception, political legitimacy and terrorism,The Project has served for more than two decades as the Muslim Brotherhood “master plan”. As can be seen in a number of examples throughout Europe – including the political recognition of parallel Islamist government organizations in Sweden, the recent “cartoon” jihad in Denmark, the Parisian car-burningintifada last November, and the 7/7 terrorist attacks in London – the plan outlined in The Project has been overwhelmingly successful.

Rather than focusing on terrorism as the sole method of group action, as is the case with Al-Qaeda, in perfect postmodern fashion the use of terror falls into a multiplicity of options available to progressively infiltrate, confront, and eventually establish Islamic domination over the West. The following tactics and techniques are among the many recommendations made in The Project:

In reading The Project, it should be kept in mind that it was drafted in 1982 when current tensions and terrorist activities in the  were still very nascent. In many respects, The Project is extremely prescient for outlining the bulk of Islamist action, whether by “moderate” Islamist organizations or outright terror groups, over the past two decades.

At present, most of what is publicly known about The Project is the result of Sylvain Besson’s investigative work, including his book and a related article published last October in the Swiss daily, Le Temps,L'islamisme à la conquête du monde (Islamism and the Conquest of the World), profiling his book, which is only available in a French-language edition. At least one Egyptian newspaper, Al-Mussawar, published the entire Arabic text of The Project last November.

In the English-language press, the attention paid to Besson’s revelation of The Project has been almost non-existent. The only mention found in a mainstream media publication in the  has been as a secondary item in an article in the Weekly Standard () by Olivier Guitta, The Cartoon Jihad. The most extensive commentary on The Project has been by an American researcher and journalist living in, Scott Burgess, who has posted his analysis of the document on his blog, The Daily Ablution. Along with his commentary, an English translation of the French text of The Project was serialized in December (Parts I, II, III, IV, V, Conclusion). The complete English translation prepared by Mr. Burgess is presented in its entirety here with his permission.

The lack of public discussion about The Project notwithstanding, the document and the plan it outlines has been the subject of considerable discussion amongst the Western intelligence agencies. One counterterrorism official who spoke with Besson about The Project, and who is cited in Guitta’s Weekly Standard article, is current White House terrorism czar, Juan Zarate. Calling The Project a Muslim Brotherhood master plan for “spreading their political ideology,” Zarate expressed concerns to Besson because “the Muslim Brotherhood is a group that worries us not because it deals with philosophical or ideological ideas but because it defends the use of violence against civilians.”

One renowned international scholar of Islamist movements who also spoke with Besson, Reuven Paz, talked about The Project in its historical context:

The Project was part of the charter of the international organization of the Muslim Brotherhood, which was official established on July 29, 1982. It reflects a vast plan which was revived in the 1960s, with the immigration of Brotherhood intellectuals, principally Syrian and Egyptians, into.

As Paz notes, The Project was drafted by the Muslim Brotherhood as part of its rechartering process in 1982, a time that marks an upswing in its organizational expansion internationally, as well as a turning point in the alternating periods of repression and toleration by the Egyptian government. In 1952, the organization played a critical support role to the Free Officers Movement led by Gamal Abdul Nasser, which overthrew King Faruq, but quickly fell out of favor with the new revolutionary regime because of’s refusal to follow the Muslim Brotherhood’s call to institute an ideologically committed Islamic state. At various times since the July Revolution in 1952, the Brotherhood has regularly been banned and its leaders killed and imprisoned by Egyptian authorities.

Since its formation, the Muslim Brotherhood has advocated the use of terrorism as a means of advancing its agenda of global Islamic domination. But as the largest popular radical movement in the Islamic world, it has attracted many leading Islamist intellectuals. Included among this group of Muslim Brotherhood intellectuals is Youssef Qaradawi, an Egyptian-born, Qatar-based Islamist cleric.

As one of the leading Muslim Brotherhood spiritual figures and radical Islamic preachers (who has his own weekly program on Al-Jazeera), Qaradawi has been one of the leading apologists of suicide bombings in and terrorism against Western interests in the . Both Sylvain Besson and Scott Burgess provide extensive comparisons between Qaradawi’s publication, Priorities of the Islamic Movement in the Coming Phase, published in 1990, and The Project, which predates Qaradawi’s Priorities by eight years. They note the striking similarities in the language used and the plans and methods both documents advocate. It is speculated that The Project was either used by Qaradawi as a template for his own work, or that he had a hand in its drafting in 1982. Perhaps coincidentally, Qaradawi was the fourth largest shareholder in the Al-Taqwa Bank of Lugano, the director of which, Youssef Nada, was the individual in whose possession The Project was found. Since 1999, Qaradawi has been banned from entering the  as a result of his connections to terrorist organizations and his outspoken advocacy of terrorism.

For those who have read The Project, what is most troubling is not that Islamists have developed a plan for global dominance; it has been assumed by experts that Islamist organizations and terrorist groups have been operating off an agreed-upon set of general principles, networks and methodology. What is startling is how effectively the Islamist plan for conquest outlined in The Project has been implemented by Muslims in the West for more than two decades. Equally troubling is the ideology that lies behind the plan: inciting hatred and violence against Jewish populations around the world; the deliberate co-opting and subversion of Western public and private institutions; its recommendation of a policy of deliberate escalating confrontation by Muslims living in the West against their neighbors and fellow-citizens; the acceptance of terrorism as a legitimate option for achieving their ends and the inevitable reality of jihad against non-Muslims; and its ultimate goal of forcibly instituting the Islamic rule of the caliphate by shari’a in the West, and eventually the whole world.

Below is the English translation of 'The Project'