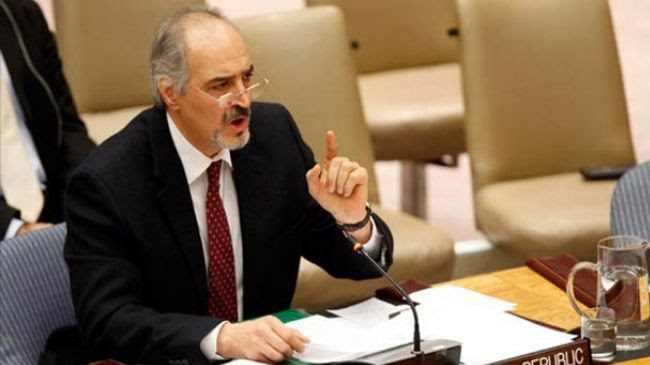 Syria’s Permanent Representative to the UN Bashar al-Jaafari said that there are states that support terrorist organizations in Syria and prevent to put these organizations on terrorism lists, and at the same time they impose unjust steps against the Syrian people and exploit their needs and suffering for political gains.

Al-Jaafari, at a Security Council session held on Friday (27 May 2016) to discuss the situation in the Middle East, said it has become known to everyone that the aforementioned countries support and protect terrorist organizations and cover up their crimes in the Security Council, which was made apparent when certain states refused Russia’s request to include “Ahrar al-Sham movement” and “Jaish al- Islam” on the Security Council’s list of terror groups, despite the fact that these groups are operating in an alliance with Jabhat al-Nusra terror organization on the ground and carrying out terrorist activities.

He affirmed that the terrorist organization of “Jaish Al-Islam” launches rocket shells against civilians in Damascus and Aleppo daily, while “Ahrar Al-Sham” perpetrated terrorist suicide blasts and the latest of its blasts were the two bombings which hit recently the two cities of Jableh and Tartous that left hundreds of casualties.

The Syrian UN Representative added that the aforementioned states rejected yesterday a Syrian request to add what is called “Jaish Mohamad” to terrorists’ list, and name such terrorist organizations “the Syrian moderate armed opposition” and call them to take part in Geneva talks as if there is “ moderate and extremist terrorism .. Halal (Allowed) and Haram (forbidden) terrorism”.

He pointed out that some states claim to care for human rights and the Syrian people, making statements left and right as if their only concern is the safety, stability, welfare, and interests of the Syrians, but in reality these states’ actions on the ground prove otherwise.

Al-Jaafari wondered why the Under-Secretary General of the UN, since he was in Turkey, did not refer to the sad news concerning the exploitation of Syrian children by the Saudi terrorist Abdallah al-Muheseni who plays the role of Mufti for the terrorist organization of Ahrar Al-Sham which is widely spread over areas in the northern countryside of both Aleppo and Idlib, calling for paying attention to these mentioned facts.

Over what the Under-Secretary General said that the two cities of Jableh and Tartous were subjects to an attack by a suicide detonated himself, Al-Jaafari said the least thing can be said about such statement is that “incomplete, and lacks inclusiveness” since He knows that the two terrorist organizations of ISIS and Ahrar al-Sham publicly adopted their perpetrations of the two terrorist explosions of Jableh and Tartous, so consequently he knows the identity of the perpetrator of the two terrorist bombings is known to the UN Under-Secretary General.

“How could we talk about putting an end to the sufferings of the Syrians inside and outside the country and ending the humanitarian crisis in light of politicizing the humanitarian issue and utilizing the suffering of the Syrians for political goals, like Erdogan’s statements two days ago who threatened to hinder the Turkish-European agreement on the crossing of refugees if the EU reject to exempt Turkish citizens from entry visas into the EU” al-Jaafari wondered.

The Syrian senior Diplomat also wondered about means of ending the crisis and tackling the humanitarian situation in Syria without dealing seriously with the Saudi, Qatari and Israeli violations of the UN Security Council’s resolutions, particularly resolution no. 2253, pointing out to the continuation of these regimes to financing, training and arming the Takfiri terrorist groups without taking into account the danger of such a behavior on the security and stability of the region and the world.

Commenting on the confusion raised by some parties regarding the humanitarian access, al-Jaafari stressed that the Syrian Government accepted all the medical assistance except tools that could be used by terrorists. Of the 26 requests for humanitarian convoys in May, it had accepted 19, but the United Nations had only sent three, he noted. Voicing Syria’s readiness to cooperate with the UN, he nevertheless underlined that “cooperation is a two-way street”, calling upon the Organization to consult the Government rather than simply criticizing it.

He asserted that any delay in giving permissions was for guaranteeing the safety and security of the humanitarian aid workers, in addition to ensuring that the aid would be delivered to those who deserve it.

He affirmed that the UN and other international organizations couldn’t have delivered the humanitarian aid over the past five years without the cooperation and the facilitations provided by the Syrian Government.

He continued that ending the humanitarian crisis in a sustainable manner can be done through eliminating foreign-backed terrorism seriously and ending the foreign interference in Syria’s internal affairs.

Al-Jaafari concluded by saying that the Syrian Government is committed to pushing the political track forwards as the delegation of the Syrian Arab Republic participated in Geneva talks and the delegation showed seriousness and was committed to the talks, but the problem was imposing the so-called “Riyadh delegation” by some countries as the only interlocutor with preconditions and with a single goal which is foiling the talks.

Commenting on what was said by the US Ambassador that Syria’s Representative doesn’t care about responding to the UN, al-Jaafari said that this is not right because most of his statement was in response to what was mentioned in the report of the UN Secretary-General, referring that there is a huge defect in organizing the delivery of the humanitarian aid to Syria.

“We, as member states, defend the provisions of the UN Charter which affirms the dignity and sovereignty of the states, and not the intervention of their sovereignty all of the time , and then covering that with the pretext of protecting civilians and providing humanitarian aid,” al-Jaafari said.

(Video of the speech -in Arabic) https://youtu.be/Q5dAEUgW8ZQ