Todenhöfer: Interview With Al-Nusra Commander "The Americans stand on our side"

This interview by Jürgen Todenhöfer was first published in German on September 26 2016 by the Kölner Stadtanzeiger, the major newspaper in the Cologne region. (The interview was copied and translated to English by Bernhard for educational and academic purposes.)

It was the seventh trip by my son Frederic and me to the civil war country Syria. We were there for 13 days. Words can only barely describe the extent of damage and suffering on both sides.

We conducted the interview ten days ago with a commander of the al-Qaeda branch "Jabhat al-Nusra". Abu al-Ezz reported quite openly about his financiers Saudi-Arabia, Qatar and Kuwait. We were able to exactly research the identity of the man and know practically everything about him.

Interview in the stone quarry in Aleppo

The interview was arranged by a rebel from Aleppo. I have had contacts to Syrian rebels for years. It was conducted outside of Aleppo in a quarry in direct sight- and shooting-distance of Jabhat al-Nusra and could only be reached safely by a member of al-Nusra.

His fighters were partially not masked, i.e. easily identifiable. Part of his statements were nearly verbally confirmed shortly thereafter by a mufti in Aleppo. Other assertions about the lack of interest of rebels towards a ceasefire and an international aid-convoy also bore out. Just like his predictions about planned military activities in several cities of Syria. 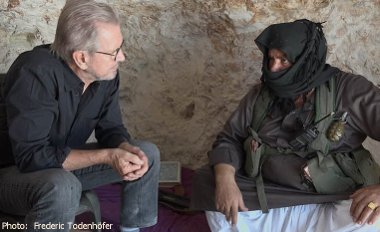 Abu al-Ezz, commander, says about Jabhat al-Nusra (al-Qaeda): "We are one part of al-Qaeda. Our principles are: Fighting vice, pureness and security. Our affairs and our way have changed. Israel, for example, is now supporting us, because Israel is at war with Syria and with Hizbullah.

America also changed its opinion about us. Originally "IS" and us were one group. But "IS" was used in the interests of big states like America, for political reasons, and was steered away from our principles. It became clear to us that most of their leaders work with secret security services. We, Jabhat al-Nusra, have our own way. In the past they with us, they were our supporters.

Jürgen Todenhöfer: How is the relation between you and the United States? Does the U.S. support the rebels?

Abu al-Ezz: Yes, the U.S. support the opposition, but not directly. They support the countries which support us. But we are not yet satisfied with this support. They should support us with highly developed weapons. We have won battles thanks to the "TOW" missiles. We reached a balance with the regime through these missiles. We received the tanks from Libya through Turkey. Also the "BMs" - multiple rocket launchers. The regime excels us only with their fighter jets, missiles and missile launchers. We captured a share of its missile launchers and a large share came from abroad. But it is through the American "TOW" that we have the situation in some regions under control.

No, the missiles were give directly to us. They were delivered to a certain group. When the "road" was closed and we were besieged we had officers here from Turkey, Qatar, Saudi Arabia, Israel and the United States.

What did those officers do?

Experts! Experts for the use of satellites, missiles, reconnaissance work, thermal surveillance cameras ...

Were there also American experts?

Yes. The Americans are on our side, but not as it should be. For example we were told: We must capture and conquer "Battalion 47". Saudi Arabia gave us 500 million Syrian pounds. For taking the "al-Muslimiya" infantry school years ago we received from Kuwait 1.5 million Kuwaiti dinar and from Saudi Arabia 5 million U.S. dollars.

From the governments or from private persons?

The fight is difficult, the regime is strong and it has support from Russia ...?

We will fight until the downfall of the regime. We will fight Russia and the West because the West does not stand on our side. The West only sends us mujahedin, it facilitates the way of those fighters. Why doesn't the West support us properly? We have many fighters from Germany, France, Great Britain, America, from all western countries.

You have many fighters from Europe in Aleppo with the "al-Nusra front"?

What do you think about the ceasefire?

We do not recognize the ceasefire. We will reposition our groups. We will undertake in the next, in a few days an overwhelming attack against the regime. We have rearranged all our armed forces in all provinces, in Homs, Aleppo, Idlib and Hama.

You do not want those 40 trucks with aid supplies to bring those into the eastern part of Aleppo?

We have demands. As longs as the regime is positioned along Castello road, in al-Malah and in the northern areas we will not let those trucks pass. The regime must retreat from all areas in order for us to let the trucks pass. If a truck comes in despite that, we will arrest the driver.

Why did a few of your groups pull back a kilometer or 500 meters from the Castello road?

The regime used highly developed weapons against us. We received a backlash. That is why we silently retreated, to recover and to attack the regime anew. But this attack must lead to the downfall of the regime.

So that was a trick, a military tactic?

Yes, it was a military tactic.

Was the aim of this tactic to receive food or the reallocation of fighters?

We did not agree to the ceasefire.

Does that hold only for the al-Nusra Front or for all other groups, the rest of your allies?

The applies to all our integrated groups, who are our allies.

They are all with us. We are all the al-Nusra Front. A groups is created and calls itself "Islamic Army", or "Fateh al-Sham". Each group has its own name but their believe is homogeneous. The general name is al-Nusra Front. One person has, for example, 2,000 fighters. Then he creates from these a new group and calls it "Ahrar al-Sham". Brothers, who's believe, thoughts and aims are identical to those of al-Nusra Front.

Is that your own opinion or also the opinion of higher management levels?

That is the general opinion. But if someone comes to you and makes you a 'moderate fighter' and offers you to eat and to drink, will you accept that or not?

450,000 people were killed in this war. I have been to Aleppo and Homs. Many parts are destroyed. If the war continues the whole country will be destroyed. Millions will die. ... In Germany we once had the 'Thirty Years' War' ...

We are now only 5 years at war, that is comparatively short!

Would you accept someone from the Assad-regime within a transitional government?

We accept no one from the Assad-regime or from the Free Syrian Army, which is called moderate. Our aim is the downfall of the regime and the founding of an Islamic state according to the Islamic sharia.

The people of Aloush, who traveled to Geneva for negotiations, accepted a transitional government.

There are Syrian mercenaries. Aloush fights with the al-Nusra Front. The groups Turkey houses and from which the Free Syrian Army was created have earlier been with al-Nusra Front. These people are weak people, they received a lot of money, they sold themselves. They must follow the orders of their sponsors.

The "Islamic Army and the "ISlamic Front" negotiate in Geneva

Because their leaders were produced in the West. They are counseled and paid by western secret services and the secret services of the Gulf states to fulfill the aims of those countries.

We are here at the most forward observation point of the Sheik Said area. This are is under our control. Behind those houses and al-Majbal are regime soldiers. Our armed forces are 200 meters from here.

Also see |
‘Americans are on our side’: Al-Nusra commander says US arming jihadists via 3rd countrieshttps://www.rt.com/news/360690-us-arms-nusra-syria/

VIDEO below is RT's interview with the German Journalist Jurgen Todenhofer

‘US knows weapons sent to Syrian rebels end up with terrorists’ – German journo to RT..