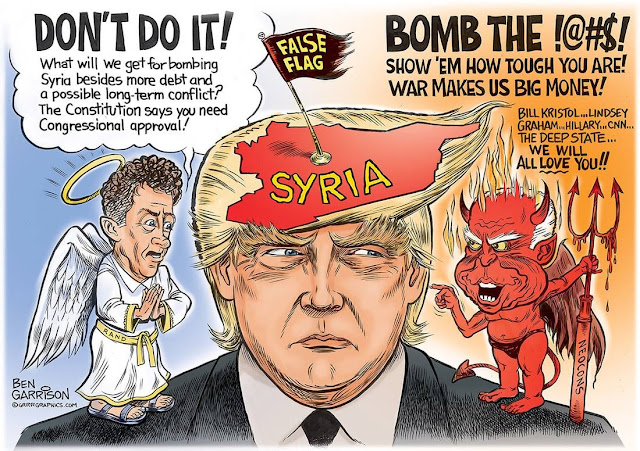 I confess I really had hopes for some conscience from Trump about America’s wars, but I was wrong -- fooled again! -- as I had been by the early Reagan, and less so by Bush 43. Reagan found his mantra with the “evil empire” rhetoric against Russia, which almost kicked off a nuclear war in 1983 -- and Bush found his ‘us against the world’ crusade at 9/11, in which of course we’re still mired.

It seems that Trump really has no ‘there’ there, far less a conscience, as he’s taken off the handcuffs on our war machine and turned it over to his glorified Generals -- and he’s being praised for it by our ‘liberal’ media who continue to play at war so recklessly. What a tortured bind we’re in. There are intelligent people in Washington/New York, but they’ve lost their minds as they’ve been stampeded into a Syrian-Russian groupthink, a consensus without asking -- ‘Who benefits from this latest gas attack?’ Certainly neither Assad nor Putin. The only benefits go to the terrorists who initiated the action to stave off their military defeat. It was a desperate gamble, but it worked because the Western media immediately got behind it with crude propagandizing about murdered babies, etc. No real investigation or time for a UN chemical unit to establish what happened, much less find a motive. Why would Assad do something so stupid when he’s clearly winning the civil war? No, I believe America has decided somewhere, in the crises of the Trump administration, that we will get into this war at any cost, under any circumstances -- to, once again, change the secular regime in Syria, which has been, from the Bush era on, one of the top goals -- next to Iran -- of the neoconservatives. At the very least, we will cut out a chunk of northeastern Syria and call it a State.

Abetted by the Clintonites, they’ve done a wonderful job throwing America into chaos with probes into Russia’s alleged hacking of our election and Trump being their proxy candidate (now clearly disproved by his bombing attack) -- and sadly, worst of all in some ways, admitting no memory of the same false flag incident in 2013, for which again Assad was blamed (see Seymour Hersh’s fascinating deconstruction of this US propaganda, ‘London Review of Books’ December 19, 2013, “Whose sarin?”). No memory, no history, no rules -- or rather ‘American rules.’

No, this isn’t an accident or a one-off affair. This is the State deliberately misinforming the public through its corporate media and leads us to believe, as Mike Whitney points out in his brilliant analyses, “Will Washington Risk WW3” and “Syria: Where the Rubber Meets the Road,” that something far more sinister waits in the background. Mike Whitney, Robert Parry, and former intelligence officer Phil Giraldi all comment below. It’s well worth 30 minutes of your time to read.

Lastly, I enclose Bruce Cumings’s “Nation” analysis of North Korea, as he again reminds us of the purposes of studying history. Can we wake up before it’s too late? I for one feel like the John Wayne veteran (of war) character in “Fort Apache,” riding with the arrogant Custer-like General (Henry Fonda) to his doom. My country, my country, my heart aches for thee. 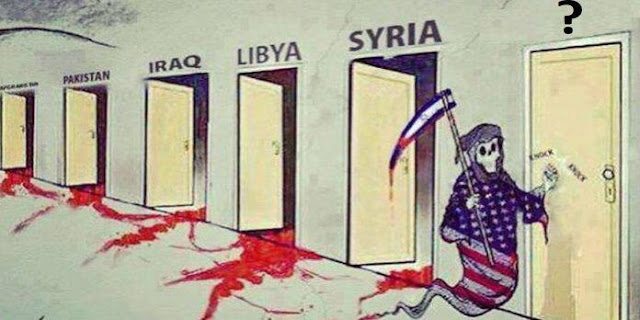