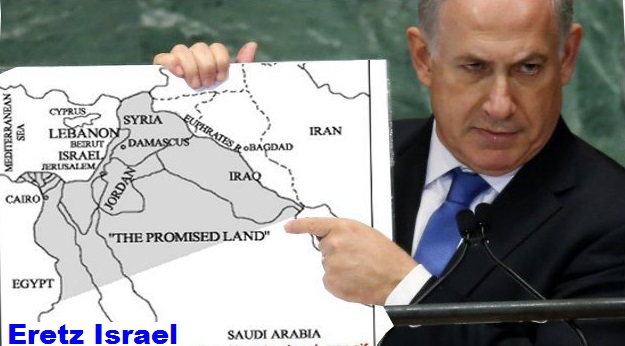 So here we have it -- after weeks of quiet about Syria -- where the US has been happily bombing away, killing hundreds of Syrian civilians without a murmur from the western corporate-state media -- and where the Syrian forces are racing to consolidate their territory (before the US & its proxy forces occupy it), by destroying the ISIS & Al-Qaeda jackals that have infested the country for the last 5+ years, culminating in the lifting of the jihadi siege on Deir Ez-Zor earlier this week -- a UN body set up for the purpose comes out with a finding , not based on evidence but on the testimony of those who set up & promoted the false flag in the first place, that it is the Syrian government that was responsible for chemical weapons attacks in Khan Sheikhoun & elsewhere in April this year.

On the heels of this farcical UN finding, which shows little more than that the UN has now gone the way of the League of Nations in the 1930s, comes an attack - the very next day - by the Israel airforce, reportedly on Syria's 'chemical weapons facility' -- as if such a facility existing is a foregone, incontrovertible fact, not a controversial allegation to say the least - in fact, a complete & utter lie!

The facility just also happens to be a surface-to-surface missile factory that is absolutely vital to Syria's war against the jihadi jackals unleashed on Syria & nurtured by the unholy alliance of USA/NATO, the Gulf states & Israel. That the western state-corporate media unquestioningly regurgitate this propaganda in the service of criminal imperialist war aims makes them equally culpable; it also shows that the myth of a free press -- an independent '4th estate' is way outmoded & the media will need to be brought to heel in any broad spread popular upheaval against the parasitic classes.. 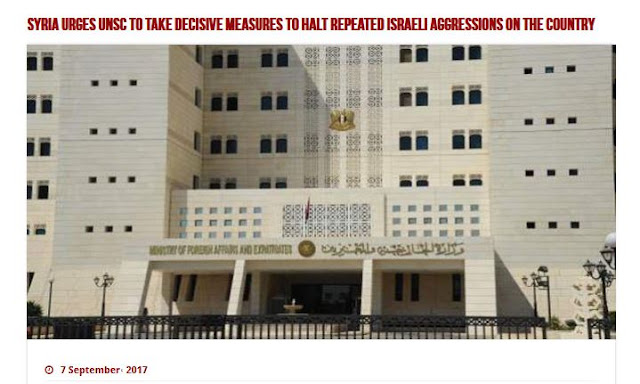 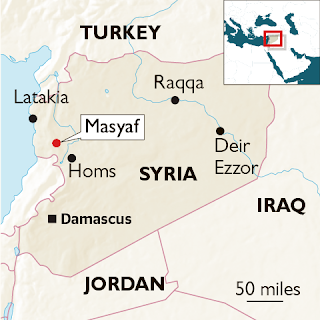 Syria demanded UN Security Council to condemn the Israeli repeated aggression on the country and take an immediate and decisive measure to halt them in accordance with its resolutions related to combating terrorism, warning of the catastrophic consequences of such attacks which complement the ISIS crimes and practices to escalate the situation and fuel the region and the world.

” At 02:42 a.m. on Thursday September, 7th, 2017 , the Israeli warplanes targeted one of the Syrian military positions near Misyaf in Hama province with several missiles, killing two army personnel and causing material damage to the site,” Foreign and Expatriates Ministry said in two letters addressed to UN Secretary General the Chairman of the UN Security Council.

The Ministry added that the new Israeli attack aims at raising the morale of its agents represented by the terrorist groups which are carrying out its aggressive agenda and in response to the great achievements made by the Syrian Arab army and its allies in their war against terrorism, the last of which is breaking the 3-year ISIS siege of Deir Ezzor city.

The repeated Israeli attacks have become systematic behavior with the aim of protecting Jabhat al-Nusra and ISIS terrorists, said the ministry, noting that it is unacceptable that the UNSC has not taken decisive measures to put an end to such flagrant attacks.

The Ministry called upon the UNSC and countries which have an influence on the Israeli entity to immediately condemn those attacks and halt them in order to defend security and stability and protect the lives of people all around the world.

SYRIANGIRL: Clues Suggest US or Israeli Attack on Syria Could Happen Soon

SYRIANGIRL Does it Again! - Predicted Israeli CW Strike 10 Days Ago