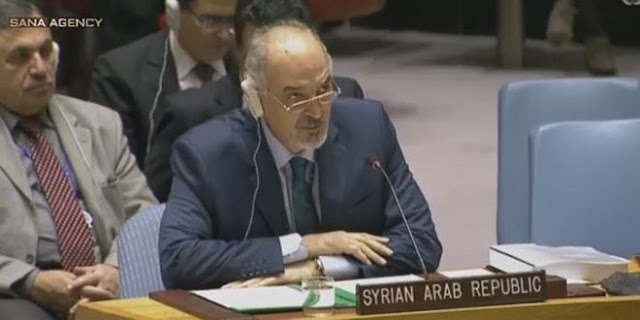 Syria’s Permanent Representative to the UN Dr. Bashar al-Jaafari stressed that the Syrian people are the only ones to determine the future of their country, reaffirming Syria’s commitment to the final statement of the Syrian National Dialogue Congress in Sochi.

Al-Jaafari made his remarks during a UN Security Council meeting to discuss the situation in Syria, pointing that the US presence in Syria violates the UNSC Resolution No. 2254 which provides for preserving Syria’s sovereignty, independence and territorial integrity, not to mention the 2nd article of the UN Charter which stipulates for respecting sovereign equality of all UN members, mutual non-use of military force, and non-interference in other countries’ internal affairs.

He regretted that the UN special envoy for Syria Staffan de Mistura, in his briefing, has overlooked the presence of US and Turkish forces on the Syrian territory, noting that there is no provision in the UN Charter that justifies intervention in any state’s internal affairs.

Al-Jaafari said that 29 resolutions on Syria have been adopted by the UN Security Council and all of them stress all parties’ commitment to the Syrian State’s sovereignty, independence and territorial integrity in accordance with the UN Charter and its principles, adding that “We have the right to question the actions taken by the UN Security Council to guarantee these objectives set by the founders in order to achieve peace, security and stability in the world.

He noted that Syria is not the first victim of some UNSC member states’ violation of the UN Charter and the international law, but the suffering of Syria came as a result of the deliberate blindness to previous violations committed over decades.

Al-Jaafari questioned the measures taken by the UN Security Council when some of the UN member states undermined its Charter and deprived the Palestinian people of their right in establishing a Palestinian state with al-Quds as its capital, not to mention the invasion of Iraq, the destruction of Libya, the unlimited support to international terrorism and flagrant intervention in the internal affairs of other member states and the looting of national assets as is the case in several African states.

In addition to their violations of the UN Charter provisions to implement their agendas at the expense of the Syrian people and their future, the US, France and Britain have made every effort to undermine Syria and its people and exploit media to reach this end, distort the reality of what is happening and misleading the public opinion regarding the humanitarian suffering of civilians due to the practices of armed terrorist groups which used them as human shields and controlled schools and hospitals and turned them into military points, jails for abductees and bases for firing mortar shells on safe areas, noting that in the last 20 days Damascus has been targeted with 1000 shells, al-Jaafari added.

He referred to the takfiri Wahhabi fatwas issued to shed the Syrian blood, the facilitations provided to secure the entry of tens of thousands of terrorists and mercenaries from more than 100 states which are UN members through the borders, the establishment of training camps in the neighboring countries and the attempts to introduce these terrorists as “moderate opposition”.

Al-JaafarI said that the former Qatari Prime Minister acknowledged that the states which support terrorism have spent USD 137 billion to assist terrorists, meantime the former US ambassador in Damascus also admitted that the US spent USD 12 billion to support terrorists and change the Syrian government between 2014 and 2017, adding that WikiLeaks uncovered the US anti-Syrian policies since the US-British invasion of Iraq.

He said that the same states supplied the terrorist groups with toxic chemical materials to be used against the innocent civilians after which they fabricated incidents and information and submitted false testimonies to mislead the investigative mechanism and accuse the Syrian government in order to carry out its aggression.

He said that the Syrian government has submitted 136 letters containing valuable information about the terrorists’ possession and use of toxic chemicals, but none has read them.

Al-Jaafari added that these states attempted to justify the repeated attacks conducted by the so-called US-led international coalition on Syrian areas, the latest of which is the illegitimate attack on Syrian popular forces fighting Daesh terrorist organization in the east northern countryside of Deir Ezzor on Feb.8th which clearly shows the reality of this coalition and Washington’s role in supporting Daesh terrorists, reminding the UN member states of the US-led international coalition’s airstrikes on Syrian military positions in al-Thardah Mountain in Deir Ezzor and their deliberate destruction of 90% of al-Raqqa province.

He affirmed that the main task of US-led coalition is supporting terrorists in Syria.

He said that these states once again violated the UN Charter provisions when they stood silent watching the repeated Israeli attacks on the Syrian territories, the most recent of which is the Israeli aggression on February 10, 2018 and it was justified by the US representative to be in retaliation for Iran deploying a drone over the occupied Palestine which is a groundless allegation.

This is not the first time that Israeli occupation forces launch an attack against Syria’s sovereignty. It has always breached the sovereignty of my country till its warplane was recently shot down by a Syrian missile over the Occupied Palestinian territories, he added.

Another evidence on these countries’ violations is preventing the UN Security Council from issuing statements to condemn terrorist organizations’ attacks targeting with 1000 rocket and mortar shells the residential neighborhoods, suburbs, diplomatic missions, service facilities and churches in Damascus and other cities, claiming the lives of dozens of civilians and injuring hundreds of others.

They circulated the term of besieged areas when tackling the situation in the Eastern Ghouta in the countryside of Damascus and overlooked the reality that the inhabitants of the Eastern Ghouta are besieged from inside by the armed terrorist groups which use the civilians as human shields, seize humanitarian assistance materials and sell them to needy people just like what happened in the eastern neighborhoods of Aleppo city.

The US decision on military intervention in Syria was illegitimate and unilateral under pretext of fighting Daesh terrorist organization, then Washington declared that it wants to establish military bases to preserve the strategic security and the security of its allies and later on it made clear that they are in Syria to create armed militias which will control oil, gas and water resources and establish a mini-state, after which it said that the US will maintain its presence in Syria even after the eradication of Daesh, said al-Jaafari, adding that the same justifications were used by the US to preserve its presence in Iraq.

On the Syrian National Dialogue Congress in Sochi, al-Jaafari welcomed Russia’s efforts, particularly President Vladimir Putin, to host and organize this event, noting that the Congress has proved once again that the political process in Syria would not be possible unless it is led by the Syrians themselves without any foreign intervention.

He stressed that the Sochi Congress’ final statement forms a fundamental basis for the political track and a solid foundation for any upcoming dialogue or talks.

Al-Jaafari reiterated Syria’s adherence to any political solution that helps stop the shedding of Syrian blood, preserve its sovereignty, independence and territorial integrity and guarantee the Syrian people’s right to determine the future of their country through intra-Syrian dialogue.