GENEVA (Reuters) - U.N. human rights investigators have gathered testimony from casualties of Syria’s civil war and medical staff indicating that rebel forces have used the nerve agent sarin, one of the lead investigators said on Sunday.

The United Nations independent commission of inquiry on Syria has not yet seen evidence of government forces having used chemical weapons, which are banned under international law, said commission member Carla Del Ponte.

“Our investigators have been in neighboring countries interviewing victims, doctors and field hospitals and, according to their report of last week which I have seen, there are strong, concrete suspicions but not yet incontrovertible proof of the use of sarin gas, from the way the victims were treated,” Del Ponte said in an interview with Swiss-Italian television.

“This was use on the part of the opposition, the rebels, not by the government authorities,” she added, speaking in Italian.

Del Ponte, a former Swiss attorney-general who also served as prosecutor of the International Criminal Tribunal for the former Yugoslavia, gave no details as to when or where sarin may have been used.

President Bashar al-Assad’s government and the rebels accuse each another of carrying out three chemical weapon attacks, one near Aleppo and another near Damascus, both in March, and another in Homs in December. 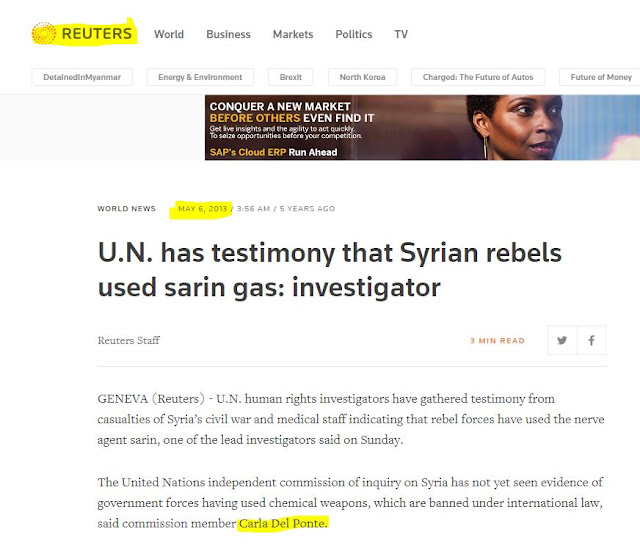