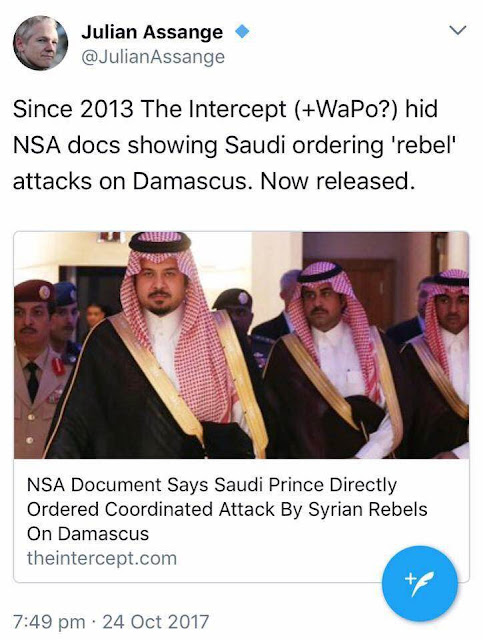 Extract from the Intercept article:

-> the March 2013 rocket attacks were directly ordered by a member of the Saudi royal family, Prince Salman bin Sultan (https://en.wikipedia.org/wiki/Salman_bin_Sultan_Al_Saud)

-> Salman had provided 120 tons of explosives and other weaponry to opposition forces, giving them instructions to “light up Damascus” and “flatten” the airport.

-> A number of videos posted by Syrian opposition media on the day of the attacks purport to show rebel fighters firing rockets at the same sites mentioned in the U.S. document. Local media reports from that day described an attack in which rockets struck within the areas of the presidential palace, a local government security branch, and the airport.

-> American spies found out about the attacks several days before they were launched.

-> ISIS did manage to get a hold of both private funding and significant quantities of foreign armaments, including U.S. arms, during the maelstrom of the wars in Syria and Iraq. While largely independent, in 2015, Jabhat al-Nusra, Al Qaeda’s local affiliate, also benefitted from its participation in an umbrella coalition of Saudi-, Turkish-, and Qatari-sponsored groups known a Jaish al-Fatah, or the “Army of Conquest.”