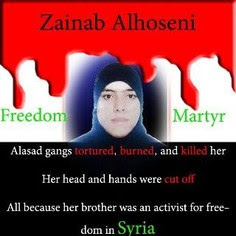 A major thread running through the story of the Libyan conflict has been the information war – propaganda spread by intelligence agencies, military, media and political groups designed to encourage hatred, conflict, war, foreign intervention, death and destruction.
One sad aspect of the propaganda war has been the role played by Amnesty International and – as we will see -the heavily compromised Human Rights Watch (HRW), organisations which used to be highly regarded (and still employ some decent, well-intentioned and brave individuals.)
The daily output of propaganda is difficult to keep up with, let alone dispel. With fabricated stories describing camel bones as mass graves containing 1270 bodies, Moussa Ibrahim reportedly being found in women’s clothing and viagra apparently being distributed as a weapon of mass destruction in order to “rape children as young as EIGHT” the propaganda is beyond parody. Human Rights Watch – infiltrated
HRW has always been a somewhat dodgy organisation, largely funded by billionaires such as George Soros and the Rausing family whose fortune comes from Tetra Paks, exploiting cheap labor in China and (allegedly) tax dodging on an industrial scale. According to its 2010 financial statements, HRW’s annual spend on fundraising was $8,042,326 and $2,344,370 on management and general costs.
Human Rights Watch is very close to the US foreign policy establishment. Cables recently released by Wikileaks show HRW workers regularly meet with US officials abroad and as 08BANGKOK1522 makes crystal clear, HRW has been infiltrated by US government assets (our emphasis and italics):
2. (C) A long-time and trusted Embassy contact based in Thailand with HRW (STRICTLY PROTECT) revealed to us that the May 14 press release \”Burma: Donor States Must Monitor Aid\”generated a certain amount of internal dissent during its drafting.
Of particular concern to HRW staff on the ground was reference to a report that the Burmese military appropriated international relief supplies.  The final version released to the media stated \”HRW confirmed an Associated Press (AP) report in which high-protein biscuits supplied by the international community had been seized by the military, and that low-quality, locally produced substitutes were instead delivered to communities in need.\”
3. (C) According to our contact, HRW received the story from a trusted source in Rangoon on May 12.  This Rangoon source stated that a Burmese Ministry official (NFI) had claimed that the Burmese military confiscated a shipment of high-protein biscuits and transferred them to a military warehouse. The Ministry official adamantly believed that the biscuits were replaced with an inferior version before distribution to cyclone victims, though he provided no verification of this claim. The Rangoon source had no first-hand knowledge of the action by the Burmese military and had not been able to follow-up with the Ministry official as to the current whereabouts of the alleged biscuits. HRW Thailand shared this story with their headquarters in New York, but couched it as for internal consumption only.
The Zainab al Hosni affair
The emasculation of Amnesty International is perhaps even more disappointing and it is a major victory for Admiral Stavridis’ information warriors to have neutered this once radical organization. Fresh evidence that Amnesty has been hijacked to a pro-NATO intervention agenda has been revealed by Syrian State TV and Russia Today.
On 23 September (whilst ignoring the genocide of the Tawergha , the NATO bombing of civiliansand civilian infrastructure in Libya) Amnesty issued this report about Zainab al Hosni of Homs:
Fresh evidence of the extreme brutality being meted out to Syrian protesters and their families has been revealed today by Amnesty International.
The mutilated body of 18-year-old Zainab al-Hosni of Homs, the first woman known to have died in custody during Syria’s recent unrest, was discovered by her family in horrific circumstances on 13 September.
The family was visiting a morgue to identify the body of Zainab’s activist brother Mohammad, who was also arrested and apparently tortured and killed in detention. Zainab had been decapitated, her arms cut off, and skin removed.
“If it is confirmed that Zainab was in custody when she died, this would be one of the most disturbing cases of a death in detention we have seen so far,” said Philip Luther, Amnesty International’s Deputy Director for the Middle East and North Africa.
“We have documented other cases of protesters whose bodies were returned to their families in a mutilated state during recent months, but this is particularly shocking.”
The killings of Zainab and Mohammad bring Amnesty International’s records of reported deaths in custody to 103 cases since mass protests in Syria began in March this year.
Amnesty International, Human Rights Watch, CNN, Al Jazeera and most other media outlets used the case of Zainab in order to try to justify the sanctions against Syria (seeInfanticide masquerading as policy) and intervention in Syrian affairs by the thoroughly discredited International Criminal Court and by the UN Security Council.
In a statement guaranteed to fan the flames in Syria, deputy Middle East director at Human Rights Watch, Joe Stork pronounced:
“Syrian security forces either killed and mutilated Zaynab al-Hosni or are turning a blind eye to gangs committing gruesome murders against anti-government activists and their families.
In either case, the government of Bashar al-Assad is perpetuating a climate of terror in Syria and fanning the flames of sectarian mistrust.”
Now, embarrassingly for all concerned, Zainab has turned up alive and well (though complaining about having had to run away from home due to being abused by her brothers) on Syria TV:
An Amnesty International spokesperson told the BBC:
We will endeavor to be a little more cautious and phrase things a bit more nuanced.
Update: Amnesty Internatioanl and Human Rights Watch have issued a joint-statement  which seeks to explain their position on Zainab al-Hosni case and in which they
“regret any inaccuracy in the misidentification of the body as that of Zaynab al-Hosni.”
Source: http://humanrightsinvestigations.org/2011/10/07/human-rights-watch-and-amnesty-international-fan-the-flames-of-conflict-in-syria/

The article is taken from the http://humanrightsinvestigations.org web site in its entirety. Please visit for many more...

Email ThisBlogThis!Share to TwitterShare to FacebookShare to Pinterest
Labels: Syria