How the Muslim Brotherhood sees the 'Syrian Revolution'

Never mind ‘freedom’ and ‘democracy’, that’s all for international public consumption. The statement below is from the Muslim Brotherhood’s official plan for Syria, back in March 2011. Notice the identified enemy ‘the secular regime’ 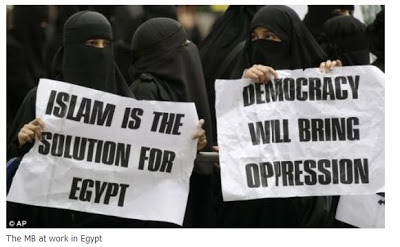 In the late March 2011 the Muslim brotherhood distributed stealthy a statement in some of their dens and mosques in Syria. The statement entirely based on religious hatred in order to incite people to protest against the Syrian government with only one goal: To finally impose their Sharia law.
First of all, it was too hard for me to translate this statement, and that is because of the writing style, it is actually very primitive and disgusting, exactly as if you are reading some sort of Middle-Ages hatred preaches, and for the same reason the translation is somewhat long.

Below is the complete translation of the statement of the Muslim Brotherhood about the situation in Syria, and for anyone who does not know this Brotherhood: It is the name of an underlying terrorist organization that launched in the eighties of the twenty century a series of attacks against the Syrian state and other sects: Kindergartens, schools, buses, villages, lawyers, doctors, professors, universities, and military officers. They also managed to plant bombs in some vital parts of Damascus such as Al-Azbakiya quarter, in which more than two hundreds of innocent women and children were killed. They also managed to take over one of the most important military schools in Aleppo, the Artillery School, and kill all the students and officers who were “infidels” in their point of view.

The Muslim brotherhood was officially a forbidden party in Syria because it committed unimaginable crimes against both the Syrian state and its citizens. 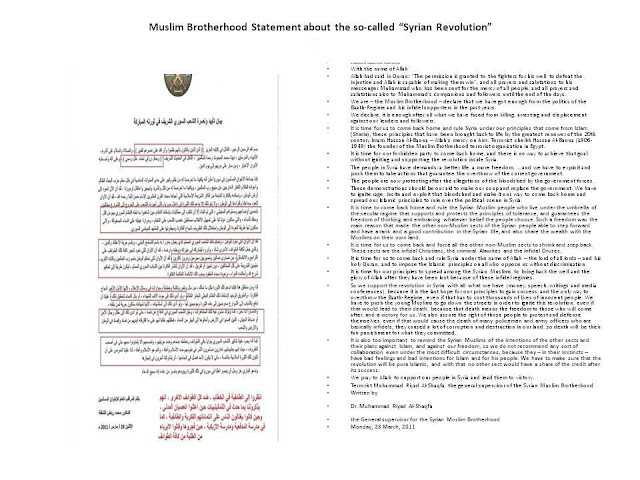 A Statement of Support to the People of Syria
With the name of Allah
Allah had said in Quran: “The permission is granted to the fighters for his well, to defeat the injustice and Allah is capable of making them win”, and all prayers and salutations to his messenger Muhammad who has been sent for the mercy of all people, and all prayers and salutations also to Muhammad’s companions and followers until the end of the days.
We are – the Muslim Brotherhood – declare that we have got enough from the politics of the Baath-Regime and his infidel supporters in the past years.
We declare, it is enough after all what we have faced from killing, arresting and displacement against our leaders and followers.
It is time for us to come back home and rule Syria under our principles that come from Islam (Sharia), these principles that have been brought back to life by the greatest renewer of the 20th century Imam Hassan Al-Banna – Allah’s mercy on him.

It is time for our forbidden party to come back home, and there is no way to achieve that goal without igniting and supporting the revolution inside Syria.
The people in Syria have demands: a better life, more freedom, … and we have to exploit and push them to take actions that guarantee the overthrow of the current government.
The people are now protesting after the allegations of the bloodshed by the government forces.
These demonstrations should be our aid to make our coup and replace the government. We have to ignite rage, incite and exploit that bloodshed and make it our way to come back home and spread our Islamic principles to rule over the political scene in Syria.
It is time to come back home and rule the Syrian Muslim people who live under the umbrella of the secular regime that supports and protects the principles of tolerance, and guarantees the freedom of thinking and embracing whatever belief the people choose. Such a freedom was the main reason that made the other non-Muslim sects of the Syrian people able to step forward and have a rank and a good contribution in the Syrian life, and also share the wealth with the Muslims on their own land.
It is time for us to come back and force all the other non-Muslim sects to shrink and step back. These sects are the infidel Christians, the criminal Alawites and the infidel Druzes.

It is time for us to come back and rule Syria under the name of Allah – the lord of all lords – and his holy Quran, and to impose the Islamic principles on all who oppose us without discrimination.
It is time for our principles to spread among the Syrian Muslims, to bring back the well and the glory of Allah after they have been lost because of these infidel regimes.
So we support the revolution in Syria with all what we have (money, speech, writings and media conferences), because it is the last hope for our principles to gain success, and the only way to overthrow the Baath-Regime, even if that has to cost thousands of lives of innocent people. We have to push the young Muslims to go down the streets in order to ignite this revolution, even if that would lead to their death, because that death means the freedom to those who will come after, and a victory for us. We also assure the right of those people to protest and defend themselves, even if that would cause the death of many policemen and army officers who are basically infidels, they caused a lot of corruption and destruction in our land, so death will be their fair punishment for what they committed.

It is also too important to remind the Syrian Muslims of the intentions of the other sects and their plans against Islam, and against our freedom, so we do not recommend any sort of collaboration even under the most difficult circumstances, because they – in their instincts – have bad feelings and bad intentions for Islam and for his people. We have to make sure that the revolution will be pure Islamic, and with that no other sect would have a share of the credit after its success.
We pray to Allah to support our people in Syria and lead them to victory.
Written by
Dr. Muhammad Riyad Al-Shaqfa
the General supervisor for the Syrian Muslim Brotherhood
Monday, 28 March, 2011

SYRIA FOR WRITING AND PUBLISHING THIS ARTICLE.