SYRIA - This is not a war against the regime 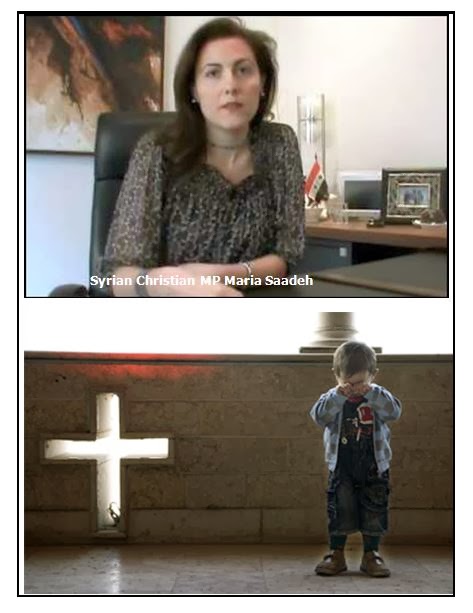 - 'This is not a war against the regime, as the international media has long portrayed it to be, but a war to destroy the Syrian State by a group of extremists and criminals controlled by foreign powers'

- 'Terrorists targeting children to force their families to flee'

A young Syrian Christian MP has accused rebel forces of targeting children and schools in government-held areas, especially ones with a Christian-majority population.

Some 11,000 children have already died in the conflict, but the Syrian deputy Maria Saadeh - in Rome to meet with Pope Francis and raise awareness in the West about ''what is really happening in Syria'' - said they have now become a target for Al-Qaeda-linked and jihadist groups. ''There have been five attacks alone on Christian schools over the past few days, injuring and killing children,'' she said, claiming that it is a strategy ''to get Christians - who are secular and moderate - to flee the country.''

Some 450,000 of the just over two million Christians in Syria have left the country. Saadeh blames the media for the slanted take on what happens in Syria. ''It is not a war against the regime, as the international media has long portrayed it to be, but a war to destroy the Syrian State by a group of extremists and criminals controlled by foreign powers,'' she said.

The deputy did not want to identify with the regime, but said that the top priority right now is to defend the State. ''If the Syrian State collapses, it will mean the total disintegration of the country,'' leaving 23 million citizens without wages, pensions, schools or healthcare in the hands of Al Qaeda-linked groups that are dreaming of a ''Sunni caliphate''. Saadeh said that the rebels are destroying ''the country's administrative facilities, factories, agro-food system, and archeological sites.'' ''How can the West think that the killings, the car bombs, the attacks on civilians and the beheadings,' she asked, ''are synonymous with democracy?''.

The MP asked Europe to ''reopen embassies and diplomatic channels in Syria, so as to be able to mediate and help the civilian population.''

The defense of the State does not involve solely Syrians, she warned, since ''we must work together against jihadist terrorism. Al Qaeda is operating in Syria now, but jihadist Islam has spread to Europe as well. The top goal must therefore be to halt the violence and stop fundamentalist groups from getting weapons and money.''

Once stability has been restored, then elections and changes can be brought in, she said. ''Syria's political system has deteriorated and is outdated,'' she noted, but it should be reformed ''using democratic means and in compliance with national sovereignty.''

Saadeh hopes to make her voice and views heard on this visit to Italy. She had tried to get to Rome in the past as well, but ''the foreign minister at that time, Giulio Terzi, rejected my visa application without any official reason. Perhaps because my views are in contrast with the anti-Assad propaganda.''