The media spin machine is again kicking into high gear, perfectly timed to accompany the "Geneva II" Syria peace talks. The lies are necessary to give the Obama administration an upper hand in the peace negotiations, which are not being used to pursue peace, but instead, to accomplish the Obama administration’s longstanding goal of Syrian regime change. Here are the top three Western media lies about the Syrian peace talks.

1) The removal of Syrian Bashar al-Assad was an agreed upon "precondition" for the Geneva II peace talks.

This lie has been repeated over and over by government and media alike. It has zero basis. The Obama administration claims that this precondition was expressed in the "Geneva communiqué," which was a road map agreement meant to guide the Geneva II peace talks, agreed upon by some of the major parties of the negotiations, including Russia.

The communiqué does indeed call for a negotiated political transition, but nowhere does it state that such a transition cannot include President Assad. Such a condition would have been outright rejected by Russia.

In fact, the Geneva communiqué includes this crucial statement:

"[a transition government] could include members of the present [Syrian] government and the opposition and other groups and shall be formed on the basis of mutual consent." Nowhere does it specifically mention or imply President Assad would have to leave power first.

The Los Angeles Times recently stepped out of line and exposed this lie:

"[John] Kerry regularly cites the “Geneva communiqué,” a kind of peace road map hammered out in June 2012 during a United Nations-organized summit. But the document does not explicitly call for Assad’s ouster."

The Obama administration is especially adamant about this "Assad must go" precondition because it knows that, if free and fair elections were held tomorrow in Syria – as part of a UN-backed "transitional process" – President Assad would likely win. This is the result of the ethnic and religious minorities in Syria that have rallied behind President Assad, since they've witnessed the consistent religious sectarian atrocities committed by the U.S.-backed rebels (which the U.S. media loves to ignore or minimize).

Assad would probably win an election since there is also simply no one else on the government side or the opposition side with his name recognition or popularity. The U.S.-backed rebel war in Syria has vastly strengthened Assad’s political hand, but you wouldn't know it from the Western, anti-Syrian media.

Demanding Assad’s ouster also does not reflect the situation on the ground. The U.S.-backed rebels have never controlled more than one Syrian city, namely Raqaa, which is dominated by al-Qaeda and is governed under a Taliban-style interpretation of Islamic law, which includes a strict ban on music. Thus, the rebels don’t have the ground power that would even enable them to make the demand that “Assad must go”.

The fact that this lie can even be uttered publicly without encountering ridicule is a major success of Western media propaganda. The media narrative paints the U.S.-backed "good" rebels fighting both the Syrian government and the "bad" al-Qaeda linked rebels.

But the "good" rebels in the U.S.-backed Islamic Front share the same vision for Syria’s future as the al-Qaeda rebels: a fundamentalist version of Sharia law, where women live in virtual house arrest and where religious minorities are second class citizens (non-Sunni Muslims would simply be butchered, as they are on a regular basis in Syria, which is again minimized or ignored in the Western media.)

Ahrar al Sham has long been known to be an al-Qaeda type Islamist extremist group; the Western media simply chose to ignore it. But when it was recently made official, the US media chose to continue its ignoring stance, since actually reporting on it would destroy their "moderate rebel" lie. The Western media also continues to ignore the fact that the "moderate" U.S.-backed Islamic Front issued a joint statement that aligned itself to the extremist views of Ahrar al Sham, the "real" al-Qaeda.

The Western media recently blasted the "breaking news" of brand new evidence showing massive "Nazi-like" torture and murder by the Syrian government, released at the beginning of the Syrian peace talks. This may or may not be true, but the lie here is that the Western media promoted the "evidence" as being unquestionably true, when the story doesn't reach first base when it comes to evidence-based journalism.

All we really know is that there are hundreds of pictures of dead people that a "trusted source" says were killed by the Syrian government. The trusted source was designated as such by pro-Western intellectuals, who have earned professional "credibility" by helping convict war criminals in the International Criminal Court [ICC]. But as author Diane Johnstone pointed out in her excellent book "Fools Crusade," about the war against Yugoslavia – as well as in other articles – the ICC has long been used by western powers as a tool to create a pretext for war, or a tool to justify a war after the fact.

The evidence of the “NAZI-like” atrocities was written in a study paid for by the government of Qatar, which has long funneled cash, guns, and Jihadis to Syria in aid of the anti-government rebels.

Again, we don’t know if the story is true or not. But such an important investigation should be conducted by the UN or another more objective institution. The same biased dynamic occurred in relation to the infamous chemical weapons attack, where no real evidence was provided, though an unending string of "experts" were quoted in the Western media, testifying to the guilt of the Syrian Government. But when Pulitzer prizewinning journalist Seymour Hersh reported that the Obama administration lied about the rebels not having the capacity to perform such an attack, the Western media simply ignored the legend of journalism. The wrench in the propaganda machine was simply dislodged.

How do these lies become such permanent fixtures in the Western media? An excellent article in the Guardian newspaper recently discussed in depth the principal sources the Western media has used to understand the Syrian conflict.

The article exposed the incredible bias of some of the most important Western media sources on Syria, which is why they were handpicked in the first place to be "expert" sources: they had political agendas that were aligned with the US government’s foreign policy decisions. The other side of the conflict was completely ignored, except when it was targeted for ridicule. Thus, Americans and Europeans have a completely one-sided, if not fantasy-based perspective of what is happening in Syria. This has been systematic since the beginning of the conflict, as happened with the Yugoslav, Afghan, Iraq, and Libya wars.

The result of this media-led ignorance could result in yet more unnecessary deaths in a country that now has millions of refugees and over a 100,000 dead. Obama seems like he intends to exploit these peace talks with the intention of blaming the Syrian government for their failure. Having failed to defeat Assad on the battlefield in a proxy war, the Obama administration is trying to win the propaganda war. And once peace talks have failed, talk of war will resume, since "all other options have failed." 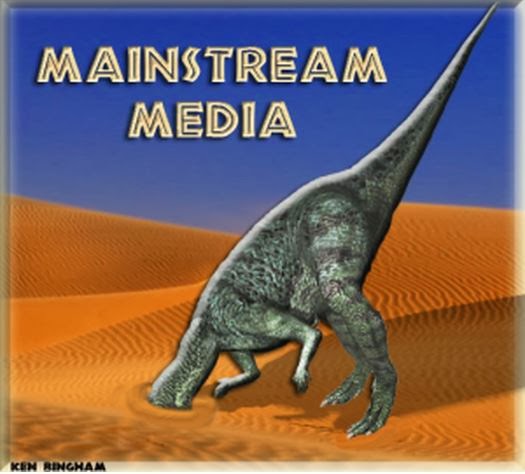