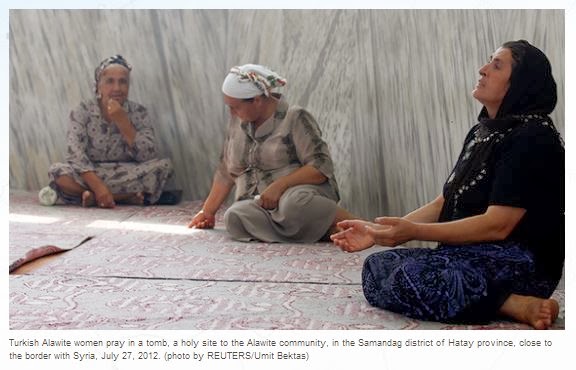 Ahmet, 80, is an Arab Alawite from the Turkish border province of Hatay. He used to be a truck driver. His family’s story is typical of the many clans that the Turkish-Syrian border cut in two like apples decades ago. Here is how he tells his story: “My grandfather Yusuf and his brother Sahin were dispatched to Yemen to fight in Ottoman ranks. Both defected from the army, unaware of each other. Grandpa Yusuf had been wounded when he defected. The brothers met in Syria by pure chance. Sahin was ready to carry his elder brother on his back all the way back to Antakya. Grandpa Yusuf, however, told his brother 'to go alone and save himself' as he would probably not survive. Sahin was haunted by a guilty conscience for having left his brother behind. Even on his deathbed, he uttered his brother’s name. Years later, a man from Syria came to the village, saying he had come to find relatives from the Haddur clan. He said he was Yusuf’s son. We couldn’t contact him again after he left.” Ahmet’s grandson chimes in: “Please, don’t mention our surname. Al-Qaeda people are around in Antakya, the situation is critical. We don’t want to become a target as a family.”

The Syrian crisis has revived bonds between Syria and Hatay, which joined Turkey through a referendum in 1939. As the bloodshed in Syria escalated, divided families began to look for each other. The turmoil has hurt not only the Alawites in Hatay’s districts of Antakya and Samandag but also Sunnis in the third district, Reyhanli, as well as Sunni Arabs in Kilis and Akcakale along the border and Kurds in Mursitpinar, Ceylanpinar and Nusaybin further to the east.

The Feb. 9 massacre in the Alawite village of Maan near Hama, perpetrated by al-Qaeda and Islamic Front groups, became the latest incident to cut Hatay’s Alawites to the bone. Thirty-two people from the Haddur clan alone were slaughtered, a source from Damascus told Al-Monitor. The victims of the “jihadists,” who came from Soran and Merek, were mostly women and children, while the rest were young men from the village’s “popular defense unit.” Relatives of the dead set up mourning tents in the town of Mahrusi and in Homs. According to the London-based Syrian Observatory for Human Rights, half of the 40 victims in Maan were civilians, while the other half were militiamen. Syrian state television put the death toll at 61 or 62.

Most residents in the Turkish village of Hancagiz near Samandag belong to the Haddur clan. Yet, they are anxious to speak of their kinship bonds and even to grieve openly, fearful of becoming the target of fanatic groups fighting with sectarian motives in Syria. But Alawites did show their indignation over Maan at protests in Hatay, Mersin, Istanbul and other cities, just as they did after last year’s massacre in Latakia, which figured also in the Human Rights Watch report.

Every news report of a fresh massacre erodes the fabric of Hatay, an area of traditional peace and fraternity, where different religions, races and sects share a common civilization. Sunnis and Alevis, Muslims and Christians continue to smile cordially at each other, but an increasing number of people are now living with “a pigeon’s uneasiness.” This is only natural since the social mix in Hatay and especially its central district Antakya is virtually a mirror image of Syria. The suffering in Syria is naturally reverberating there.

Hasan Sivri, a university student from Antakya who closely observes developments at the border and occasionally publishes online comments, spoke to Al-Monitor about how the Syrian civil war affects Arab Alawites in the region. “The Turkish government’s sectarian foreign policy increased further the existing sensitivities of Arab Alawites. Videos of Syrian rebels threatening Alawites were put into circulation from military camps in Hatay,” he said. “Rumors spread quickly of people being threatened right in the street that they were 'next in line.' Radical opposition members were allowed to move around freely, strengthening the people’s perception that 'we are next in line.' One day we would come across militants in the streets and the next day we would recognize them in a video targeting Alawites and other minorities, shot in Syria. This amplified the indignation.”

Mehmet Sut, a businessman and politician from Hatay, agrees that the Syrian crisis has rekindled kinship and sectarian bonds. “No one’s sectarian and religious identity would have stood out here before the war. No one would care about Alevism. In Syria, people would describe themselves as Syrians when asked whether they were Alawites or Sunnis. I wish people in Turkey could answer in the same fashion,” Sut told Al-Monitor. “The war awoke sectarian sentiments. My old friends are mostly Sunni, but now I’ve started to wonder, 'How much we can trust them?' We never quarrel with each other. The Sunnis here are civilized people. The prime minister’s words, for instance, irked the Sunnis as well. Certain quarters had embarked on a very dirty war, seeking to start an ethnic and sectarian conflict. But thanks to the common sense of the local people, we overcame the tensions. It is no coincidence that Alawites were singled out as the perpetrators in the Reyhanli attack. That was a conspiracy. We strongly condemned it, Sunnis and Alawites together.”

As the nature of the Syrian crisis changed, the sentiment of polarization stopped short of spilling over to the streets. As Sivri says, “The Syrian crisis had initially affected neighborhood ties between [ethnic] Arabs and Turks, between Alawites and Sunnis. But the free movement of al-Qaeda-linked militants in the streets, the killing of 52 people in the Reyhanli bombing on May 11, 2013, and the economic crisis altered the stance of the Turks as well.”

Hatay’s century-old culture of cohabitation has prevented the tensions from developing into a sectarian conflict. Yet, perceptions have inevitably changed. Turkey continues to support the opposition through its “open border” policy. Groups linked with Turkey have even targeted Alawite villages near Latakia. This has essentially produced two effects. First, some quarters have started to question how genuine their integration is with the Turkish state. Second, similarly to Syrian Alawites who identify their fate with the fate of President Bashar al-Assad, local Alawites have become more inclined to defend and “exonerate” the Syrian regime. The pro-Assad chants at the “Scream for Peace” culture festival in Yesilpinar in August 2012 illustrated the drift of people who had long felt no bond with the Syrian regime.

The Arab Alawites voiced their first major reaction to the Syrian turmoil on Sept. 1, 2012, on the occasion of Peace Day. Sadly, pro-government media depicted the protests as an “alliance with Baath [Party] in Antakya,” an attitude that fanned prejudices against Alawites among supporters of the government’s Syria policy. Another peace rally, held in Antakya on Sept. 16, 2012, was broken up by heavy-handed police. Similar scenes were repeated on Peace Day the following year.

Arabic slogans and Syrian flags drew attention at the protests held almost nightly in Antakya in support of the Gezi Park demonstrations last year. The protests focused on the government’s sectarian tilt and especially Prime Minister Recep Tayyip Erdogan’s provocative statements. The five protesters killed in the Gezi protests were all Alawites (including ethnic Turkish Alevis) and three of them were from Antakya. This exposed further the crack the Syrian crisis had opened.

Meanwhile, reports of Antakya Alawites joining the Popular Defense Units in Syria fuelled antagonism in Sunni quarters. According to Sut, the said fighters are Alawites who fled Turkey and settled in Syria two or three decades ago because of links to leftist organizations. “To speak of people who went [to fight in Syria] from Antakya is misleading,” he said.


Awakening of Arab and Alawite identities

Sivri described to Al-Monitor the inner torments of Alawites, which few would openly discuss. “As the Syrian crisis unfolded, the state turned a deaf ear to the Alawites' cries. The gendarmerie would tell villagers to 'protect themselves against theft and other incidents.' As a result, Alawites began to question their relationship with the state. Virtually assimilated by now, Arab Alawites began to ask, 'Are we Turks or Arabs?' This is especially true for Arab students outside the region,” Sivri said. “We have started to embrace our culture, which they tried to obliterate over the past 80 years, especially our Arabic mother tongue. We now brandish banners in Arabic at demonstrations in cities outside the region. Friends in Istanbul, for instance, organized Arabic-language theater plays. The interest in Arabic language courses and critical history research is on the rise. During this process, we saw that Arab Christians had identical feelings and experiences. They, too, have relatives across the border, who are similarly being massacred because of their faith.”

The final word is up to Mehmet Ali Ediboglu, a parliament member for Hatay from the main opposition Republican People’s Party (CHP): “We grieve after every news of bloodshed, no matter which side it comes from. We condemn all massacres, regardless who perpetrates them. We want the bloodshed to end and peace be attained in the shortest possible time.”