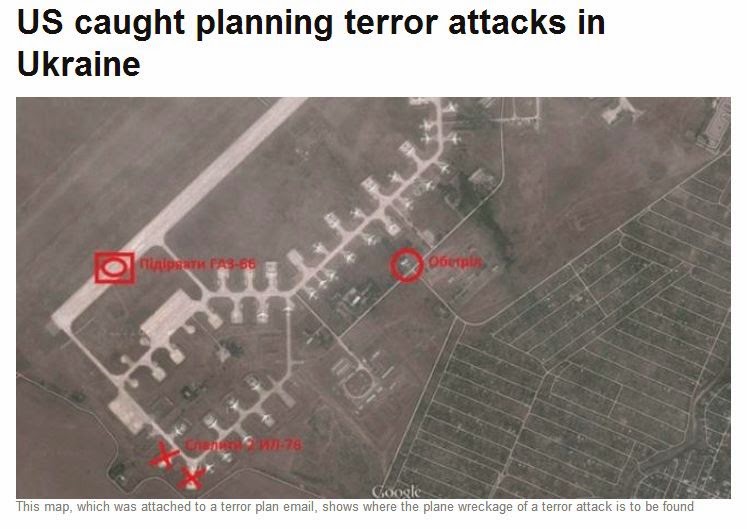 In a series of hacked emails received from “Anonymous Ukraine” it is clear that Pentagon officials working in concert with extremist elements in the Ukraine have carried out and are planning more attacks in Ukraine.

What is also clear is that these attacks are to be blamed on Russia including blowing up planes at an airport. Other attacks may well include mass civilian casualties.

The long series of emails include several that are frighteningly incriminating. This is first of the “worst,” three “smoking gun” false flag planning documents:

Events are moving rapidly in Crimea. Our friends in Washington expect more decisive actions from your network.

I think it's time to implement the plan we discussed lately. Your job is to cause some problems to the transport hubs in the south-east in order to frame-up the neighbor.

It will create favorable conditions for Pentagon and the Company to act.
Do not waste time, my friend.
Respectfully,


“Framing up the neighbor” as Lt. Col. Gresh states so inelegantly defines false flag terrorism. Other documents including a White Paper done by the International Centre for Policy Studies in Kiev dated March 4, 2014 warns of Russian “conspiracy theories.”

The Centre’s White Paper provides what intelligence experts call “deception and cover” for terror attacks planned, as we learn, by the US Army working with Ukrainian military officials and terrorist groups.

The email below, copied to COL Igor PROTSYK, Chief, Bilateral Military Cooperation Division, Main Directorate for Military Cooperation and PKO, General Staff, Armed Forces of Ukraine, not only outlines a terror attack to be blamed on Russian Special Forces, it actually includes a map of where the wreckage is to be found:


Oleg, an urgent need poshumity (sic) on behalf of Russians at the airport in Melitopol. This should be done by March 15 . Sam understands why.

First of all you must contact Pasha Tarasenko. You must know him , he is a local Liberty and has a theme. Before you arrive 10-12 boys from the Centre. Top fighters Trident. Chief Mike there, you should know it too . Details will know him. We need people to meet and provide everything you need.
Proceed with caution. Speak only Russian. 25 team is executing combat missions, so do not do them much damage to aircraft . There is a lot of scrap metal, with it you can do anything. Damaged aircraft you specify. It is essential that all was as real attack neighbor's Special Forces. But without corpses.

Give me again your account. The money will come in time, do not worry.
See the appendix . This is an example of action. Decisions are made in person.

Will publication of this hacked email actually stop the upcoming attack on Melitopol? When they specify that corpses aren’t needed, does this mean that they are planning on getting them elsewhere?

When they say “the money will come in time,” are they aware of sequestration and how the US has been paying its bills less quickly than before?

We quickly found Pasha Tarasenko through his “My Space” account. Prominently featured is a photograph in a Ukrainian Army officers dress uniform.

In this final email about the upcoming terror attack on Melitopol airport, Colonel Protsyk takes clear control of the operation:

Basil , you must quickly carry out proactive in Melitopol. There's 25 aviation brigade . Must zamaraty our sworn friends and good neighbors. I think you understand me.

Just proceed carefully and cautiously. 25 brigade combat mission out , so do not do them much damage to aircraft . There is already damaged aircraft , that He can do everything. Yihny board numbers you give. Remember , you need everything to be as real attack of the Russian Special Forces.

Brigade commander there is a reasonable man . Details of know he will not, but in extreme cases it can turn to. We did come.

..
It began with terrorist snipers hired by the “new” Ukrainian government, killing their own supporters. The US involvement was long proven through the infamous Victoria Nuland phone conversation, America “anointing” their chosen terrorists to stage a confrontation with Russia.

The second call, between the Estonian Foreign Minister, Urmas Paet and EU Foreign Minister Catherine Ahston gave us that “smoking gun,” that the current cabal in Kiev are terrorists and criminals.

We now have Americans hiring terrorists, planning attacks, working with the Ukrainian Army and Neo-Nazi groups to blow up planes, attack airports and clearly do so in order to blame Russia and inflame the world to the point of war.

Many of the other documents show planning and logistic support through Bulgaria with PowerPoints in English. Mixed in with the documents are a selection of NATO unclassified news reports.

What can be safely assumed? The US government, certainly the State Department and US Army are involved. NATO involvement is a given.

The current rulers in Kiev are proven to be the criminal element predicted by Catherine Ashton of the EU and so many others.

What we do have is a clear smoking gun, not just names but personal email addresses, mobile phone numbers and language that can never be mistaken.

Gladio based false flag terrorism is alive and well, there can be no question.

Gordon Duff is a Marine Vietnam veteran, a combat infantryman, and Senior Editor at Veterans Today. His career has included extensive experience in international banking along with such diverse areas as consulting on counter insurgency, defense technologies or acting as diplomatic representative for UN humanitarian and economic development efforts. Gordon Duff has traveled to over 80 nations. His articles are published around the world and translated into a number of languages. He is regularly on TV and radio, a popular and sometimes controversial guest. More Press TV articles by Gordon Duff