The women of the White Helmets , also known as the Syrian Civil Defence.

ALEPPO, Syria — A growing number of media reports praise the White Helmets, a group of first responders who save lives in Syria. But a recent report from an independent journalist claims the Helmets are more concerned with destabilizing the Syrian government on behalf of the group’s international backers than truly making a difference in Syrian life expectancy.

In March, CBS News praised the volunteer group: “When the bombs rain down on Syria, it is the White Helmets who run in to help. These brave volunteers claw and saw their way through the rubble to save those buried beneath.”

One White Helmet was quoted as saying that “everyone loves us in Syria” because the organization is nonpartisan and “works with all the groups.”

Similarly, in May, CNN claimed the group formed in response to the devastating use of barrel bombs by the government under Syrian President Bashar Assad, and was made up of “ordinary men who started to respond to the explosions, fires and attacks. Barbers, bakers, students and electricians, to name a few.”

Their simple common headgear, CNN reported, was simply a matter of thriftiness on the part of the suffering Syrian people: “Most had bought helmets that were white, instead of colored, simply because they were cheaper.”
. 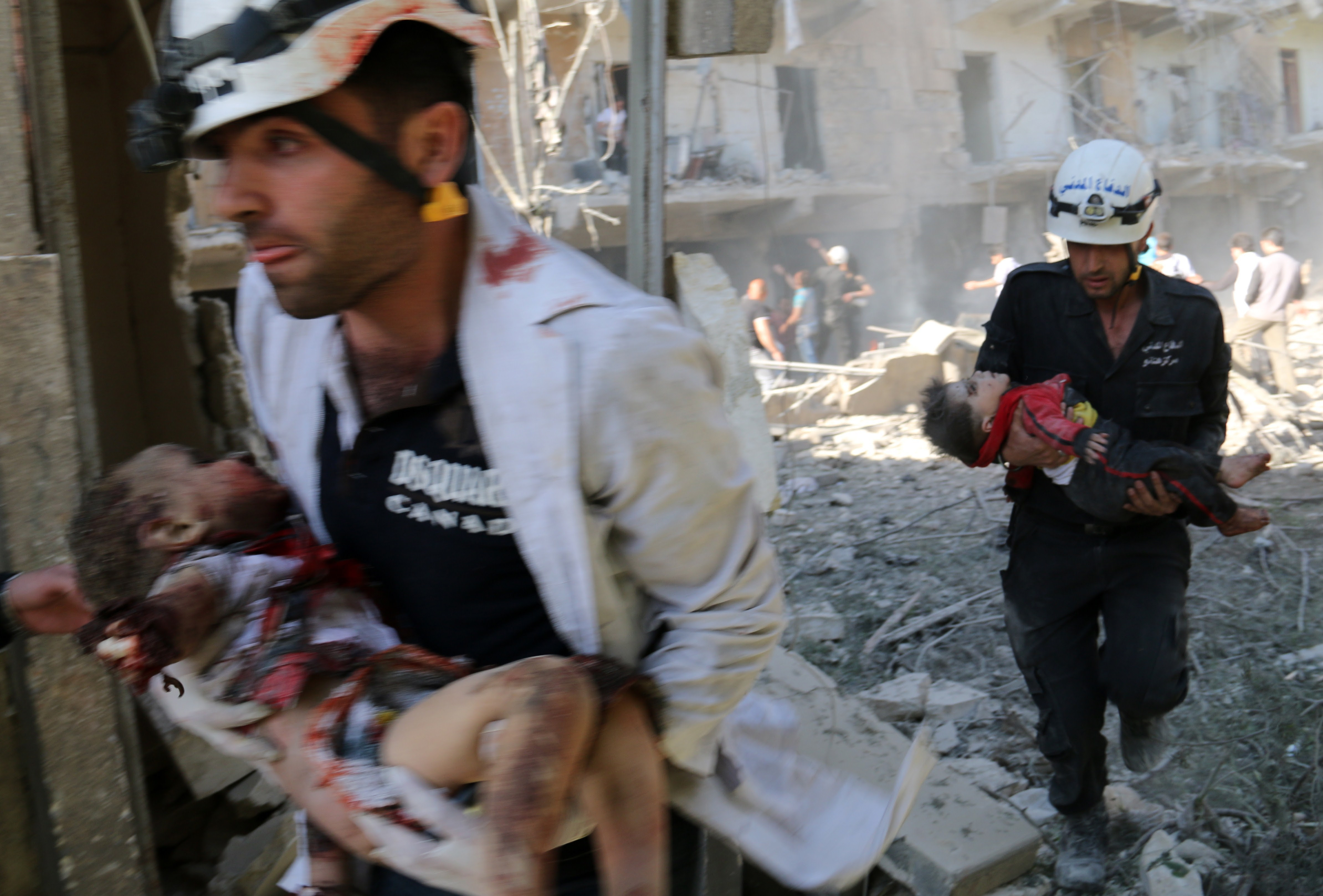 The White Helmets carry the bodies of children in the al-Mowasalat neighborhood of the northern Syrian city of Aleppo on April 27, 2014. Photo: White Helmets.

But, according to Vanessa Beeley, a peace activist and reporter focusing on the Middle East for 21st Century Wire, the White Helmets are actually an invention of foreign interest groups hoping to destabilize the Syrian government by creating propaganda that supports military intervention by the U.S. and its allies.

According to her report, published on Wednesday, the group focuses its efforts only on areas held by al-Qaida and Jabhat al-Nusra, Syria’s al-Qaida affiliate also known as the Nusra Front. They ignore atrocities carried out by these groups, which are propped up by Western aid and weapons, while creating media-friendly images of victims of Assad’s bombing of rebel-held areas.

Writing for MintPress in March, Ramona Wadi noted that, “within the context of the Arab Spring, Avaaz had clearly aligned itself with U.S. interests, relying upon sensational rhetoric and dubious claims to garner support for NATO intervention in Libya and influence public opinion on Syria.”

Further, Beeley also reported that Avaaz can be linked to the Open Society Foundation, an NGO backed by George Soros, a wealthy investor frequently linked to acts of U.S. imperialism.

She also accused White Helmets of appearing in a Nusra Front video of a civilian execution, where they can be seen removing the body in a body bag after the execution. Although the video has since been removed from YouTube, she asserted that it provided further evidence tying the White Helmets to terrorist groups that are supported by the West with the goal of ending Assad’s control of Syria.

“If you want to understand why people are promoting a particular narrative, you have to trace it back to the roots of that narrative and who it serves,” she told Sputnik.