Is Hollywood about to award an Oscar to 'For Sama' – a propagandumentary that pushes Al Qaeda's narrative in Aleppo? 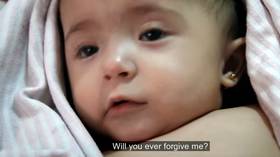 Screenshot from the trailer for For Sama (2019) PBS distribution.

Oscar-nominated ‘For Sama’ is a gritty, well produced “documentary” claiming to present the reality of the five-year siege of the Syrian city of Aleppo. Just how deceptive is this portrayal?


The 90-minute video directed by UK Channel 4’s Waad Al-Kateab and English filmmaker Edward Watts has been unanimously praised in the mainstream media and tonight it might win this year's Academy Award for Best Documentary Feature. But does the film present a truly unbiased picture of the Syrian conflict or, rather, just the side of the story that fits the Western narrative about the war?
. 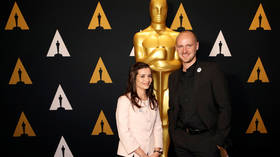 
The armed-group occupation of East Aleppo portrayed as “freedom”

East Aleppo was the armed group hinterland of the city of Aleppo for five years. During this time the shape-shifting militant cadres mingled and confronted each other in mafia-style gang warfare over territory, status, financing and control over the civilians living through their occupation. Ultimately the dominant force was Al-Qaeda or Nusra Front in Syria.

Very few journalists could safely enter this barren and desolate zone reigned over by brutal, extremist groups. Channel 4 teamed up with Syrian “revolution” sympathiser and camera-woman, Waad Al-Kateab, and her alleged “doctor” husband who goes by the pseudonym of Hamza Al Kateab (real name Zahed Katurji) to produce “citizen journalist” reportage that would effectively choreograph the events in Aleppo for an unsuspecting public in the West.
. 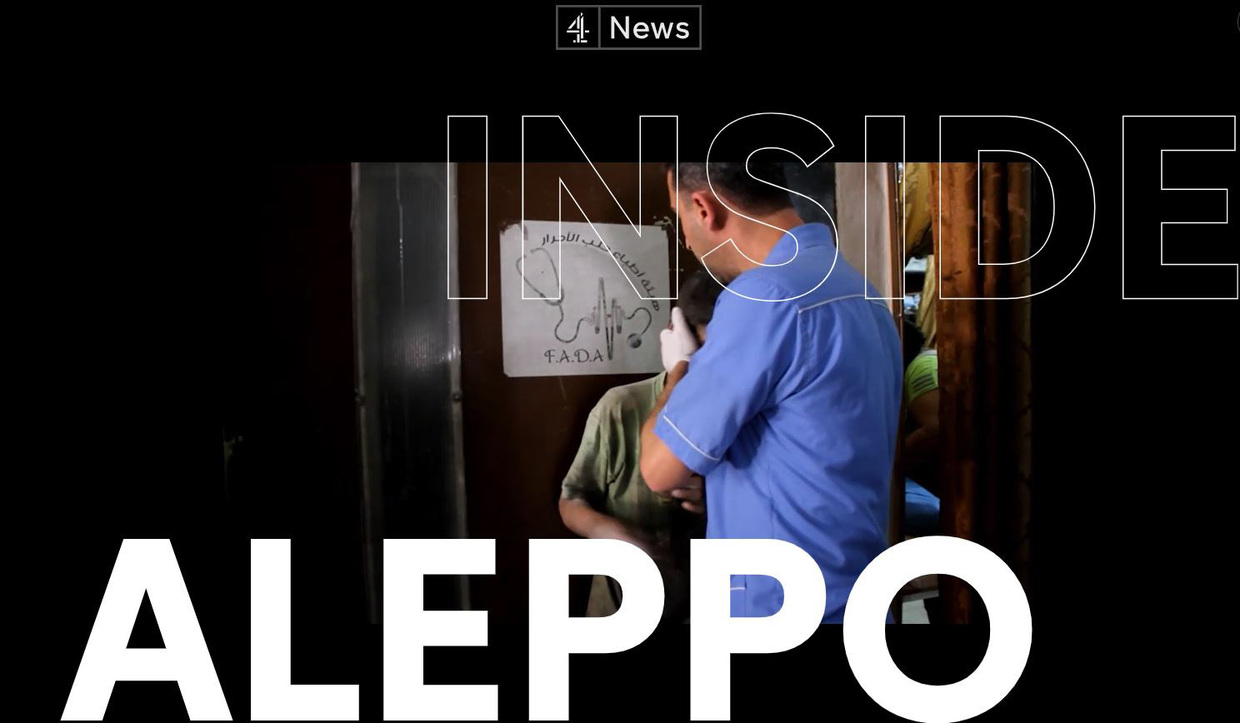 Inside Aleppo consisted of a series of video reports produced by Waad, for Channel4, that claimed to record the daily life inside the extremist group-controlled districts of East Aleppo. Channel 4 accepted and republished these reports without any apparent independent verification or investigation.

Aleppo was Channel 4’s perceived “Guernica,” their reporting was consistently one-sided and partisan towards the “moderate rebels” who, according to the British TV network, were being “disproportionately” targeted by the “dictator Assad” and the Syrian Arab Army. The reality for journalists, like myself, who spent time in Syrian-government secured West Aleppo, sheltering 1.5 million civilians including an estimated 500,000 who had fled East Aleppo when it was invaded by armed militants in 2012, was diametrically different from the narrative being marketed by Channel 4 and the majority of state-aligned media in the West. Aleppo, according to residents, was opposed to the “revolution” from day one.

Channel 4’s reporting in Aleppo and Syria has almost invariably presented the child-beheading, ethnic-cleansing sectarian groups as “rebels with a cause.” In a 2016 report, ‘Aleppo: up close with the rebels’, Krishnan Guru Murthy follows none other than members of formerly US-funded Nour Al Din Zinki, responsible for the horrific public torture and decapitation of 12-year-old Palestinian child, Abdullah, in July 2016.

In the same report, Murthy appears to legitimize the armed group strategy of mass suicide bombing as an act of “defense” without mentioning that many of these suicide bombers were targeting civilian and residential areas. Channel 4 removed this report after their lack of recognition of the war crimes committed by its protagonists was exposed.

Replying to @walid970721
Hamza's friend Maayouf of the Zinki US backed "rebel" group & his friends taunting the boy before they beheaded him. Maayouf says: "the Quds division ran out of men so they sent us a child". Another says: "these are your dogs, Bashar". (no graphic violence)#Syria See prev. tweet 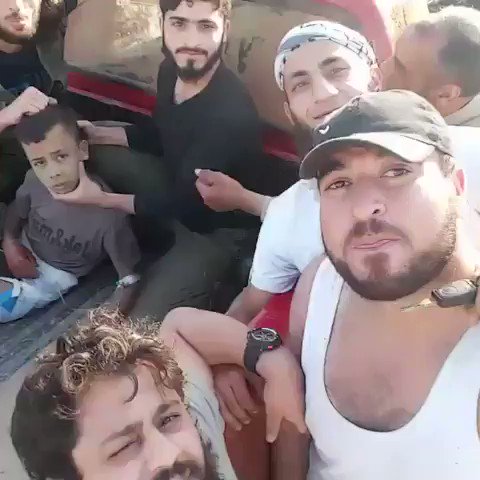 ‘For Sama’ is little more than a compilation of the ‘Inside Aleppo’ reports, skilfully converted into a feature-length documentary that has already been awarded the Bafta for best documentary and is nominated for the Oscars this weekend.

Dedicated to Waad’s daughter, the documentary can only be described as a grotesque misrepresentation of life in East Aleppo under the tyranny of sectarian armed groups. Anyone watching this movie will assume that East Aleppo was the “free country” as described by Waad, besieged and preyed upon by the Syrian government. The film literally airbrushes Nusra Front from the scenario. Groups like Nour al-Din al-Zenki are not referred to, their crimes go unmentioned.
The role of Hamza Al-Kateab affiliated with the armed groups in East Aleppo

Many journalists have pointed out the dangers of working in areas occupied by the militant factions. Waad and her husband have no apparent issues living side by side with groups renowned for their brutal violence against anyone who would challenge their rule. In fact, a number of videos and social media interactions demonstrate the close relationship that Hamza had with members of these groups – in particular with the aforementioned Nour al-Din al-Zenki. 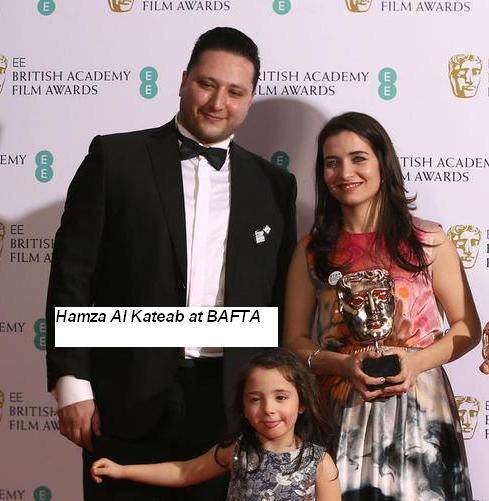 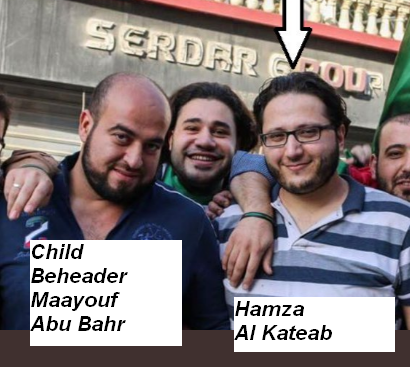 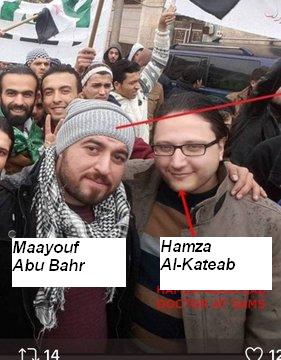 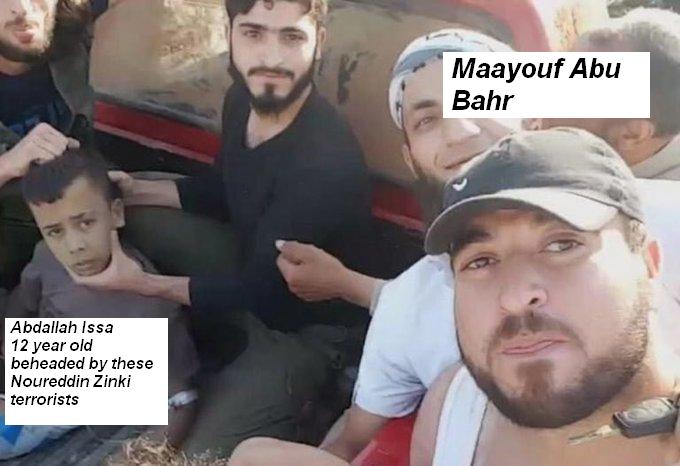 While corporate media and ‘For Sama’ portray Hamza as a compassionate “doctor,” we must ask how deceptive that image is. Many interactions have been deleted from Hamza’s social media accounts but are still available as screenshots. In these interactions Hamza is involved in military strategy discussions with extremist groups. Hamza is clearly aware of the violence and abuse meted out against civilians by the occupying forces but he never condemned it to the media outlets who relied heavily upon his testimony to file their Aleppo reports.

Replying to @VanessaBeeley and 5 others
Wondering what Mr. Snow has to say about this vid, showing Al-Qaeda linked Sarout holding #Sama while surrounded by armed terrorists, while daddy Hamza dances to the tunes of Sarout´s chants: https://www.youtube.com/watch?time_continue=10&v=63s1FTwvCTA&feature=emb_logo … #ForSama

19
11:28 PM - Feb 7, 2020
Twitter Ads info and privacy
See Carmen Renieri's other Tweets
When the terrorists were evacuated from the last district of East Aleppo, Al Sukare, where Al Quds hospital was located, they left behind a deadly trail of mines and booby traps designed to kill civilians returning to their homes. I was, myself, witness to one of these explosions, after a booby trap left in a washing machine was detonated – murdering and injuring civilians on Christmas Eve 2016.

According to social media conversations, Hamza was aware of this heinous practice. He and Waad evacuated at the same time as the armed groups. Therefore, it can be assumed that they knew about the dangers that awaited civilians, yet they apparently did nothing to warn them.

Much of ‘For Sama’ footage is located in the Al Quds hospital which was, itself, the center of controversy in East Aleppo when Doctors without Borders (MSF) declared it “destroyed” by a Russian airstrike in May 2016. Various independent researchers and journalists exposed this narrative as misleading and unsubstantiated.
. 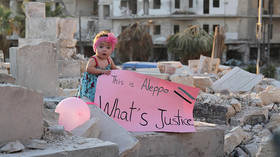 ‘For Sama’ omits the reality that hospitals in East Aleppo were taken over by the armed groups, often converted into military headquarters. The vast complex of the Childrens and Eye hospital was transformed into a torture and detainment center for civilians who did not comply with the armed group ideology or those perceived to be Syrian government-loyalists. After liberation of East Aleppo, civilians testified that they did not receive medical treatment in the remaining hospitals which were effectively militant triage centers. I spoke with children and teenagers whose injured limbs had been amputated by the so-called medical staff who preferred such cruel expediency over long-term treatment. Why does ‘For Sama’ not cover any of these inconvenient truths?

The children I interviewed in East Aleppo who were forced to witness public executions and crucifixions, by the extremist groups, are ignored by Channel 4 and ‘For Sama’. Journalists like Theo Padnos and Matthew Schrier, who were imprisoned and tortured by the armed groups in the Eye Hospital compound are not referred to.

The mortars fired daily into West Aleppo by the militants that Waad does not refer to were responsible for thousands of civilian deaths and the maiming of countless more who lost limbs in the rain of lethal “Hell-cannon” gas canister missiles or were sniped in the streets that bordered the Nusra Front-dominated enclaves.

The 2013 River Queiq massacre is portrayed, in the film, as a Syrian government crime, the gory scenes exploited to further criminalise the SAA. If Channel 4 had conducted any kind of investigation into this event, they might have fulfilled their duty to provide context and evidence that would have better informed their audiences in the West. Channel 4 must be considered grossly negligent in their distorted representation of the Syrian conflict. 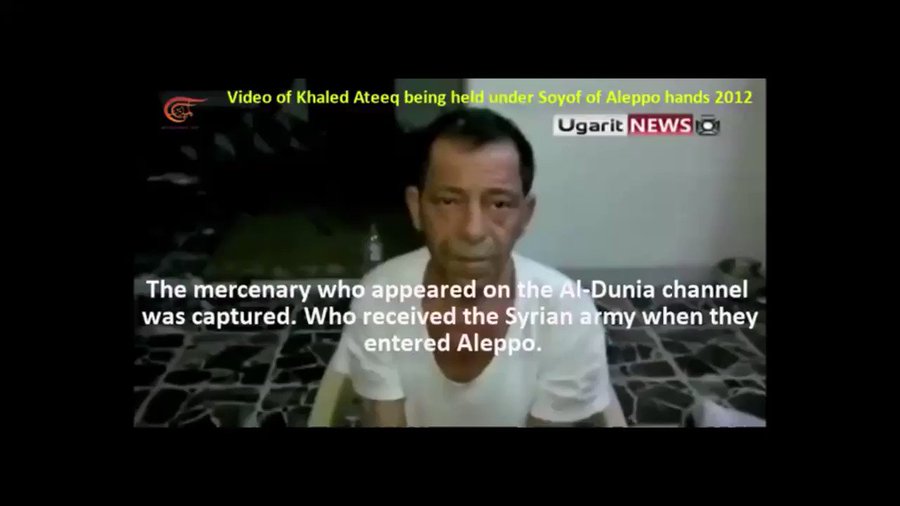 Aleppo-based journalist, Khaled Iskef, did exactly this investigation over a period of years before Al Mayadeen channel published his findings based upon forensic DNA reports and witness testimony. ‘For Sama’ glosses over fact in favor of propaganda and denies justice for the victims of extremist violence & brutality. According to Iskef’s evidence, River Queiq was a convenient dumping ground for these armed groups to dispose of evidence, Waad and Channel 4 have apparently provided cover for the crimes they committed. 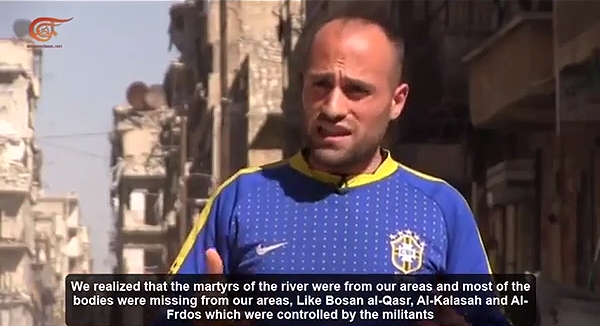 Screenshot from Khaled Iskef documentary on the 2013 River Queiq massacre, blamed on the Syrian government.


It is no surprise that Channel 4 has been instrumental in the production of ‘For Sama’. I have extensively documented the channel’s role in the behind-the-scenes management of other such revisionist projects on Syria. The White Helmets, another terrorist-linked entity operating in East Aleppo, produced an award winning, Oscar nominated movie, ‘Last Men in Aleppo’, which also eradicated the presence of extremist fighters and terrorist groups from the conflict landscape – reducing the narrative down to “bad Assad” and “good rebels.”

"For Sama" omits presence of Riyadh-trained fanatic Sheikh Abdullah Muhaysini in east #Aleppo 2016 "blessing" suicide bombers before they are released to murder Syrian civilians & soldiers. For Sama is little more than a war crime cover-up promoted by #Channel4 .@jonsnowC4 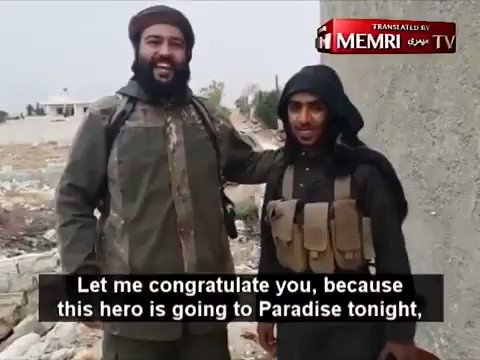 Channel 4 were among the hidden architects of this production and were also at the forefront of support for the White Helmets Nobel Peace Prize nomination while this UK/US funded group stands accused of all manner of war crimes by the Syrian people who lived under militant-group-occupation across Syria.

‘For Sama’ is an exploitative and well packaged instrument of injustice. It is an attempt by governments and media in the West to rewrite history, to erase their shameful role in maintaining a nine-year conflict, in Syria, based on lies and obfuscation of fact.

Vanessa Beeley is an independent journalist and photographer who has worked extensively in the Middle East – on the ground in Syria, Egypt, Iraq and Palestine, while also covering the conflict in Yemen since 2015. In 2017, Vanessa was a finalist for the prestigious Martha Gellhorn Prize for Journalism, which was won by the much-acclaimed Robert Parry that year. In 2018, Vanessa was named one of the 238 most respected journalists in the UK by the British National Council for the Training of Journalists. In 2019, Vanessa was among the recipients of the Serena Shim Award for uncompromised integrity in journalism. Follow Vanessa Beeley on Patreon.com and on Twitter @VanessaBeeley.