Hands OFF Our President! 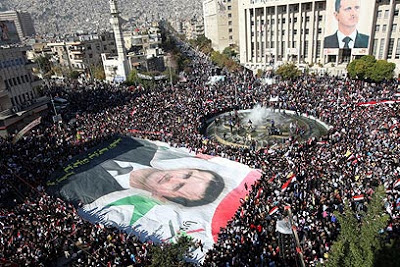 I have so much, and so very much tried to resist voicing ill mannered speech towards this ruthless and/or hate campaign however, put simply, maybe some leaders would wisely save their own peoples taxpayers money by relocating it for absolute global means, as such whatever happened to those preferential global concerns hot on their agenda (at that time)? For example, only a short while before now, Europe’s Green policy, their Environmental Awareness campaigns or this pursuant self determination of the Kurdish people within Turkey. Or whatever happened to solving the homeless people in America crisis. One would guess now, that these agenda’s aid no collective (regional or sub regional) argument or cash box political ventures.


Today, one would question has assassinating our President or more so this fabricated hate campaign towards our President replaced their more sustainable or worthwhile global concerns?

I viewed a program on MTV Lebanon yesterday evening documenting one impact of this foreign built Syrian crisis onto Lebanon.

MTV Lebanon depicted many Syrian children (some Palestinian - Syrian) refugees as young as 4 and 5 years of age selling Lotto tickets and sifting for food from scattered litter within subzero temperatures on the streets of Lebanon. These children were also interviewed. Children voiced their appreciation and living standard in Syria as compared to their current search for survival on the Lebanese Street. In detail, children described their discomfort and their readiness to return home from the streets of Lebanon to their warm homes and schools in Syria. Many children had shown their trauma and humiliation as they hid from cameras behind litter bins. So heartbreaking o view knowing we can’t help these children sort their lives. These children are displaced because of the foreign funded political campaign bringing about terror and bloodshed to their lives in Syria. Many are not receiving an education, warm home, warm meal, medicine, and clothing and put simply descent shelter.

One would question then with all the cash flows circulating and directing this hate campaign towards our President with reason of human concern to the people of Syria why are these little Syrian children as young as 4 and 5 years old sifting for food from street litter and selling Lotto tickets to the public for their and family survival on the streets near for example (as viewed) Yein Al Hilwe in Lebanon where in place they could have resided in their warm homes and sustained a well facilitated education in Syria.

Why? Why, to the international community, have these leaders and key players not highlighted and aided those Syrian children searching for survival in dirt and dust internal and external to Syria’s borders who have been impacted by this crisis? Utter disgrace and shame.

With all due respect, I would kindly request these key players to answer. Please answer.

It is a shame that these bank rollers who have been feeding this unnecessary hate campaign towards a well supported President Bashar Al Asad in the guise of their concern to the people of Syria.

In truth the people of Syria have not welcomed their political strategy but in place, in midst of the funded terror and consequentially now perishing living standards, still continue to support President Al Assad.